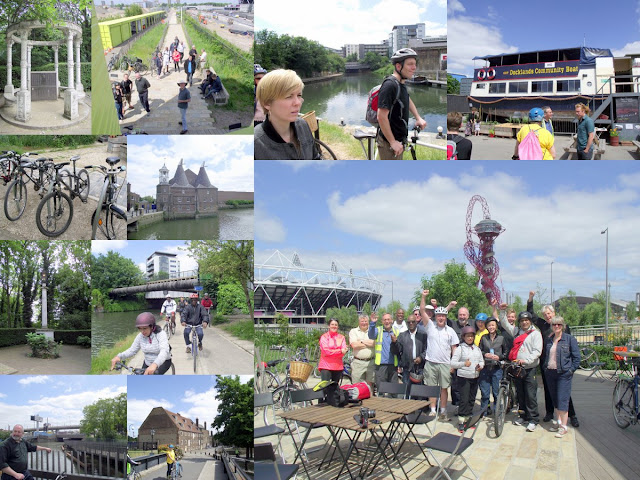 The picture collage is from this mornings bicycle ride of Newham Councillors and local residents which was led by members of the London Cycling Campaign (LCC). I think there was in total 14 Newham Councillors that turned up for the ride which started at the View Tube cafe which overlooks the Olympic Park in Stratford.

The ride had been organised by Newham Cycling Tzar, Cllr David Christie.  The weather was lovely (as it always is in Newham of course) and cycling around the beautiful waterways and historic buildings of our borough was great fun and fasinating.

I had cycled into work from Forest Gate to Bow for over 10 years and I had thought that I knew all the good cycling routes but I was totally wrong.

We ended up at with tea and coffee at the "Docklands Community Boat" in Cody Dock (named incredibly after American cowboy and showman Buffalo Bill).

I think that Newham has a fantastic future not only a place that people want to work, live and stay but also visit, explore and enjoy.

I will post more pictures on Facebook next. Update: Check link here for album.
Posted by John Gray at Saturday, June 08, 2013