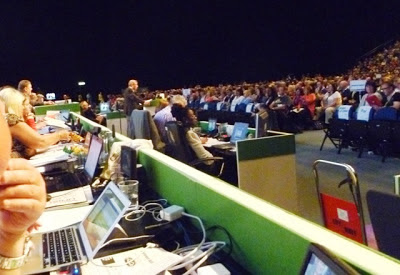 Today is the start of our National Delegate Conference in ACC in Liverpool.

I understand that there are 2500 delegates and visitors present and it is one of the largest trade union gatherings in Europe.

The conference was welcomed to Liverpool by a special guest, Comedy TV personality, Ricky Tomlinson. Ricky introduced his home town as a City with two famous football teams - Liverpool FC and Liverpool FC reserves! However he made a serious point about his conviction and that of  the"Shrewsberry 24" pickets who he believes were "fitted up" during the national building workers strike in 1972.

After the President's Address, Standing Orders Committee, Annual and Financial report, business started on a Composite motion on Employment  and Trade Union rights.

During lunch I went to a Fringe (which I will post upon later) then business started off at 2pm with th emotion "Kick it Out - Racism has no place in football".

Next was our General Secretary Dave Prentis (see picture) who gave his annual speech to the conference.
Dave's main announcement was to call on the TUC to organise a mass rally and lobby of this year’s Tory party conference, in defence of the NHS.“And if they don’t, we will because we are the folk to fight for it.” He also said “We need Labour on our side. But for too long we’ve built the careers of Labour politicians, only to be let down when we’ve needed them most.”

After his speech there were important debates on Outsourcing and Privatisation; NHS campaigning and NHS and Social Care integration.  Its now 4.40pm and I'm not sure if there will be time for me to speak on the housing motion 33 next?