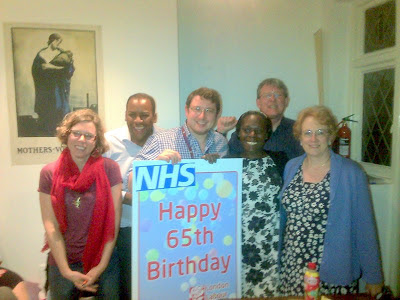 Picture is from the end of tonight's West Ham CLP AGM and of some of the new "dream team" Executive also celebrating the 65th birthday of the NHS.

58 delegates crowded into the Party rooms at 306 High Street, Stratford, E15. Best attendance since 1980s according to one delegate.

For contested positions we had one minute hustings then ballot. It all went pretty smoothly.

Kim and I were also re-elected to the Executive Committee as 2 of the 4 trade union delegates.
Posted by John Gray at Thursday, June 27, 2013