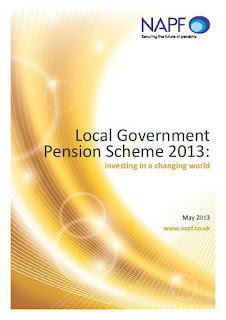 On 21st May I attend the National Association of Pension Funds (NAPF) Local Government Conference. The keynote speaker was the Minister for Local Authorities, Brandon Lewis MP.

Now I know many people think pensions is boring but there are 4.6 million people in the UK who are members of a Council pension scheme. Collectively they are all worth around £150 billion and if combined would be the 5th biggest fund in the world.

The minister announced a "root & branch review" of Council pension schemes (LGPS) including possible merger of the current 99 separate funds. He said "things will change but nothing ruled in or out" at this stage.

In the Q&A I asked him what is the main driver for merger-  is it to save money or is it to save the economy through infrastructure investment?  He suggested that the LGPS is bigger than the Canadian public pensions schemes but does not have their scale and efficiencies (answer - main driver is to save money - but I am not convinced this is the reason)

Next we had "Implementing the LGPS 2014: from here to go-live".  First was Chris Megainey, a senior civil servant from the Communities and Local Government department (who was described as the"new Terry Crossley"). His big news was that the new governance arrangements for the LGPS would not be in place before 2015. Rodney Barton from West Yorks Pensions scheme spoke about the huge threat to schemes from the complex career average administration arrangements.

Brian Strutton from the GMB reported on the LGPS Workstream 2 "governance & cost structure" and the problems of trying to convince the HM Treasury that there is a difference between a funded and unfunded public sector pensions scheme (NB £150 billion of assets methinks!). There appears to be some sort of classic "fudge" agreed with different valuations being allowed.

My question to panel was while it is important to get the details right, LGPS 2014 and auto enrolment means there is a massive opportunity to increase membership into the scheme but this will need local and national campaigns. (answer from Chris that there is no national money available so will have to be local).

I then went to the "All Change: Employer security & the new LGPS" workshop. Schemes face grave problems if admitted body employers go bust without adequate security and also these employers face often massive termination debts when the last employee retires. I asked the question that to avoid these debts should employers apply to open schemes to new entrants? Especially since the LGPS 2014 has radically changed due to cost sharing? (answer from panel that some employers have indeed done this just to avoid existing debt. But this is a cynical response? Well, cynical or not it makes sense to me!)

Back to the main conference room for "The 2013 Valuation: Health Check Results" to hear Ronnie Robertson from Hymans Robertson. The 2013 valuation is likely to be the 3rd "bad" funding vaulation outcome in a row. Employers such as housing associations will find it "very scary".  He quotes Michael Johnson who describes underfunded pension schemes as being in a "death spiral".  The interest on deficits & less assets means the fund eats itself.  My question was is the real problem the way we measure liability? investments are up but liabilities are much, much higher. Gilt yields are at a 200 year low? Yet it drives the entire investment philosophy? (answer was yes but no but)

Next workshop was "Responsible Investment: what it means for the LGPS?" NAPF used this to launch a new report on RI here.  Dr. Craig Mackenzie from Scottish Widows pointed out how much things had changed since in past there use to be argument about whether RI was even legal for pensions to consider. My question is there hard data available that can show pension committees that RI not about hugging trees but delivers superior returns? (answer: Yes, lots of it)

The last business item of the day was to be a bun fight debate on LGPS merger. However it turned out to be a bit of a let down.  Edmund Truell from London Pension Fund Authority (for merger - and general world domination) and Nicola Mark from Norfolk Pension Fund (against merger) were too polite and reasonable for a great debate.

Edmund argued that in London alone they could save £120-200 million per year from merger and unless we do so we are essentially all doomed. Nicola counted that all new local government ministers firstly ask why can't we merge the LGPS? -  then they ask "how can we get our hands on this money". She pointed out that if there is a 1% change in the Norfolk £2.5 billion scheme investments there is a £25 million difference. If there is a 1% change interest rates its impact is £480 million


My question to both was if pension funds are supposed to act in the interests of beneficiaries and with LGPS 2014 there will be risk sharing with employees, what consultation have you done with beneficiaries on whether merger is a good thing or not? (from the rather wafflery answers clearly neither have done any such consultation. Which I knew already since I have members of my trade union branch in both schemes. So why do they think they can speak on their behalf?)

The guest speaker at the dinner event was former adviser to prime minister Tony Blair, Alastair Campbell. Who gave a typically entertaining and provocative speech. For once I did not ask any questions.

I missed the next day's session since I had to go to a Pension Trustee meeting.
Posted by John Gray at Sunday, June 02, 2013

John - great blog - are you going to this years conference? Phil Woolas

I am afraid not since it is just before the Council elections and it appears the NAPF does not want any Councillors to go to its local government pension conference?