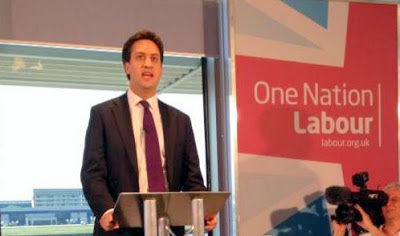 Yesterday I was at the Newham Council Dockside building to hear the keynote speech by Labour Leader, Ed Miliband on "One Nation Social Security" (it's not to be called "welfare" anymore).

The backdrop behind Ed is London City airport and (out of photo) the Tate and Lyle sugar factory. Local and London wide residents, Councillors and journalists were present as was our MPs Lyn Brown and Steve Timms, as well as local London Assembly member, John Biggs.

Newham Mayor, Robin Wales, welcomed and introduced Ed as our next Prime Minister, who in turn was very complimentary about all the good things being done by the Flagship Labour Council in Newham.

You can check out the full speech on Labourlist here but I will concentrate on some of the things I found particularly interesting.

Ed reminded us that "Labour", the clue is in the name, is the Party of work and that social security spending went up more under recent Tory government than new Labour because we got people into work.  Labour made work pay by introducing tax credits. Just because there is a small minority who don't want to work - there is a far greater majority who are simply desperate for work.

He spoke about the people who work hard, long, long hours but who live in poverty due to low wages. If a local authority can demand that its contractors can pay a living wage why can't a private company do the same?

For every pound that employers pay above the minimum wage towards a living wage, government would save 50 pence in lower tax credits and benefits and higher revenues.

He also I think appealed to "white van man" by arguing that the self employed and others should get more national insurance benefits depending on how long they have been contributing. Which I think is a very attractive policy politically (which the Tories may well nick - the problem for Labour of announcing policies 2 years before an election)

His key argument is only Labour can tackle the growing cost of social security because only Labour will deal with the underlying causes. Labour will get people into work and off unemployment benefits, increase real wages and shift from housing "benefits to building".  Good stuff Ed.

My question to Ed was that it great to hear his plans on the living wage to tackle employers who pay poverty wages but surely there is a logic that there should be a living pension and sickness benefits as well? Since while it would be marvellous if everyone had a living wage, if people then retire and have no living pension, they will be in poverty again and the taxpayer will have to make up the difference? He gave a cautious response about the need to investigate further around the whole living wage issue.

Overall, even though I had reservations about some issues I was convinced by many of the arguments and felt this was really a clever thoughtful speech of real substance.