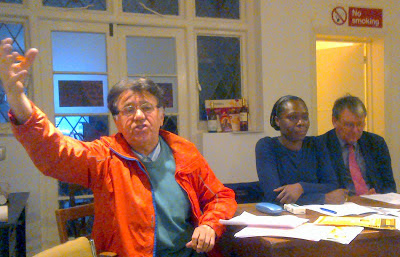 Our speaker last month was the secretary of the Campaign for Labour Party Democracy (CLPD) Pete Willsman.

It is the 40th anniversary of the CLPD. He promoted the 3 websites that they run including Left Futures. Which he claimed was not only for "lefties" but admitted that not many contributors were from Progress!  Mind you he praised Peter Mandelson for his loyalty to the Party.

He promoted CLPD rule changes for the 2013 Labour Party conference including making political levy payers full members of the Party (they use to be), an electoral collage to elect local Labour Group leaders, the Party should have an independent ombudsman to investigate complaints and the right of members to select who are their Parliamentary candidates.

Pete predicted that after the next general election there may be a split in political parties and that Cameron Tories, Orange Book Liberals and Progress will break away and join up together. He finished his barnstorming speech by asking the Blarities currently criticising the Party to all "shut their mouths"!

Pete gave a hugely entertaining, tub thumping and colourful speech which demonstrated his lifelong passion and commitment to the Party even though I am not that sure how many in the room he persuaded to actually join up.