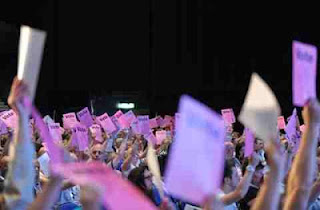 This is my speech to conference while moving a NDC amendment to to Motion 33 which was orignally from my branch and was adopted by London Region at our AGM.

Conference, your NEC believes that it is important to add to the main motion's call for more and better homes for all, the evidence found in the recent report by the Affordable Homes Alliance, Housing Voice, which is supported by UNISON.

The report evidenced the need for a mass house building target of at least 250,000 homes per year for the next 20 years - including at least 80,000 local authority and housing association homes.

Conference, this target is achievable. The simple fact of the matter is that there is a desperate and absolute housing shortage in this land. And there is no good reason for this shortage.

Remember the first Labour government 1945-1950 despite the economy being ruined by the 6 previous years of total war built one million new homes. While at the same time it built the National Health Service and the modern welfare state. In the 1950’s it was not uncommon for 300,000 new homes to be built, every single year. At its peak in my lifetime in 1968 we built 353,000 homes. The great majority at affordable rents or mortgages.

Conference, while I don’t think anyone here really doubts that we will need increases in progressive taxation in order to pay for all the things that we want to improve our society - to get people back at work, building things, making things, doing things of value to our community rather than just rotting on the dole.

Which will save public money and get the economy growing again. We also need to look at different ways of funding the new homes we so desperately need.

Housing Voice also evidenced and called for at least £5 billion of the billions of pounds currently being spent by the Bank of England on buying government gilts – the so called Quantitative Easing (QE) programme. To be invested instead in low cost housing bonds or other similar measures that that can be used to fund new build instead of lying around in bank vaults.

Conference, the simple fact of the matter is that we face a housing famine and that for too long housing need has been ignored. We need to build more affordable, safe, adequate secure homes for all and we need to think out of the box a little on how to fund it.