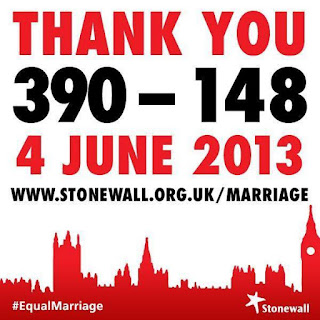 Excellent news! a wreaking amendment to oppose Equal Marriage was tonight soundly defeated in the House of Lords.

While I respect the principled opposition of those who genuinely believe that Equal (same sex) Marriage is under minding their faith in some way.

Much of the opposition is actually motivated by sheer homophobic hatred and bigotry - and should be shown up as such.

The Bill still has several stages to go in the House of Lords, it would appear that there is overwhelming support.

While I think that Equal marriage is really important and removes a stain on our society, I suspect in a few years people will think, what on earth was all the fuss and bother about? and why wasn't this introduced decades ago.
Posted by John Gray at Tuesday, June 04, 2013