Only worry about your pension if there is another Russian Revolution... 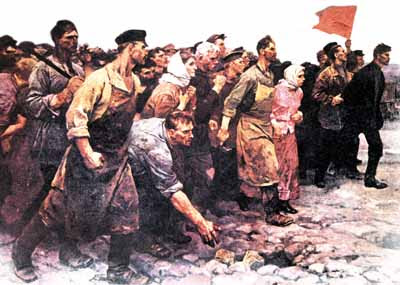 I recently went to an "off the record" Chatham House rules debate on whether closed defined benefit pension schemes should invest in equities (shares) or not?

Now, I doubt very much that all that many people will share my keen interest in such matters, but if you currently contribute to a funded defined benefit pension scheme or if you have a frozen one from a previous employer then you should.

This is your money, your "deferred pay" and unless you at least try and take an interest in it then who will you blame if it all goes horribly wrong?

The argument goes something like this. Pension funds which are "closed" (for some reason it wasn't made clear in the debate but I assume it was funds that were closed to new members and future accrual of pension benefits by existing members) are concerned about the long term not the short term and that the strength of the employer "promise" to the scheme to fund it until it pays out all its obligations is more important than anything else. Such schemes can afford to hold illiquid assets which have attractive tax efficient returns with a low probability of risk. So why invest in risky, liquid and unstable equities?

The alternative argument was that equities should be part of a mix of investments. Admittedly returns in equities in recent years have been appalling but "No means Never" and you should not throw the baby out with the bath water. UK Pensions PLC have massive pension shortfalls in funding liabilities and the only way to close this gap is the long term historic out performance from equity investments. Past performance is not guarantee of the future but the long term equity premium over bonds is an accepted market compensation for risk.

Why this is important is that if the trustees of your pension scheme gets this equities and/or bonds decision wrong, then your scheme may end up in the tender mercies of the Government Pension Protecting Fund (PPF).  The PPF is a very good thing but most people would lose out financially if their pension had to be rescued by it.

So the lesson is if you are in such a scheme then take an active interest in it and in the trustees that run it on your behalf. Read the stuff they send out to you, ask questions, take part in elections of member nominated trustees, turn up to any meetings and even consider standing yourself to be a trustee. Make sure that your scheme is run in the interests of the beneficiaries and not by any vested interests (and there are many).

Apparently there is an argument that the only real danger to equities not out performing bonds is if the economy suffered from something completely dramatic as the Russian revolution of 1917.

I hesitate to point out that next week is in fact the 95th anniversary of the Bolshevik Revolution and the Storming of the Winter Places. I hope they will keep "Pleb Gate" locked up for this anniversary.

Update: I have just been reminded that the number one issue with closed schemes is that they cost far, far more to run when closed than if they were kept open. Pension funds need new blood, new contributors to stop them becoming mature and cash deficit. Millions of workers are simply being cheated and conned out of a decent retirement while employers are often being mislead and badly advised. While many DB schemes and Government regulations need to be updated they do not have to be closed. If they are closed then it is in the real long term interests of the workers and employers that they should be reopened.
Posted by John Gray at Tuesday, October 30, 2012