Austerity: What next after #Oct20? 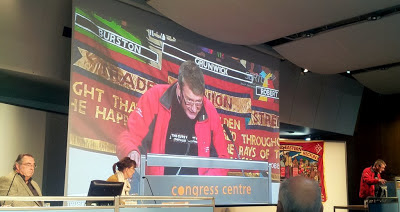 A rather intense (to be polite) picture of me speaking at Saturday's SERTUC Council meeting at Congress House. The New TUC GS Frances O'Grady had just made a cracking speech.

I was supporting the GLATUC motion on "Austerity".

"President, Council, John Gray UNISON speaking in favour of Motion 1. I will try and keep this short since much of what I wish to say has already been said. But "What next" after Oct 20 is the key issue for the Labour Movement. We must firstly continue to educate and inform our members in the Great Battle of Ideas over the Economic Alternative to Austerity.

Despite the magnificent march of last weekend, I am reminded of past reports by our own Regional secretary, Megan, to this Council and the comments you have just heard from Frances, that a majority of trade union members still think that "Austerity" is necessary, the "Cuts" are necessary and there is "No Alternative".

While we can turn out many of our activists and their families on a Saturday to protest unless we can also persuade our rank and file members, their families and their friends that there is a different way to run our country, then we are simply not going to be able bring about change.

Council, the truth of the matter is that we have a huge job of work to do. We need to not only educate but to  organise and unionise. Especially in the private sector where 85% of the workforce are not only not in any union but many of them have simply no comprehension or understanding of unions. They are Thatchers Grandchildren.

Perhaps Council, one other practical way forward is to bring to peoples attention that there are already examples of successful countries such as Sweden or Norway which are run differently. Frances mentioned "The Spirit Level" research that everyone is better off in more equal societies. Where there is greater income equality, greater trade union density and greater worker involvement in the wider economy.

Arguably Council, there is already out there A Future That Works; and it is only a ferry ride across the North Sea. Council, please support this motion.
Posted by John Gray at Monday, October 29, 2012