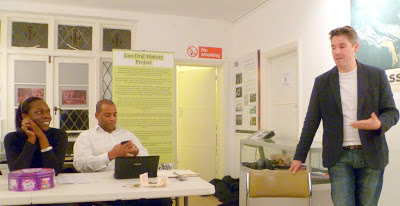 West Ham Labour Party like many active CLPs prides itself on its political debates. We regularly invite controveral guest speakers to our General Management Committee meetings (GC) which are open to all members to attend.

At GC last week, our Political Education officer had arranged for Labour Blogger and Daily Telegraph columnist, Dan Hodges, to be our guest speaker. See Dan speaking in picture next to the "tweeting" minutes secretary Terry Paul and our Chair, Charlene McLean.

Dan, is let me say, quite a "controversial figure" in the Labour Movement. His mum is former Labour MP and Hollywood actress, Glenda Jackson. He has worked in the past for the Labour Party and the GMB. But he is widely derided as the "Blairite Cuckoo in the Miliband camp". He has been a ferocious critic of the Labour leader, Ed Miliband and a strong supporter of his brother David.

You can check out my twitter comments here (25 October) on his speech and the Q&A. Afterwards the usual suspects took Dan off to "The Goose" in Stratford Broadway to continue the debate.

Dan had made a number of valid points about how fragile the Labour lead in the polls and that we should not at all take victory for granted in any future election (he thinks that unless we change, and change our leader, we will lose). He was willing to take the mick out of himself and be polite and measured in his responses to fairly direct questions and comments.

Yet I think that most people felt he is just plain wrong in his views. I must admit that he reminded me of personable figures on the "ultra left" who you listen to while quietly thinking "Yes, but, no but, but this is nonsense". I don't think the right wing of our Party (and of course we have a right wing and there is nothing per se to be scared of that) understand that the world has changed since 2008 and that we will not achieve what we frankly all want in our society without radically changing the way we run our economy.

Update: apologies but of course Glenda is still a MP (thank you Alex Sobel) and Dan has tweeted that "nice blog" but he didn't say that unless we changed our Party leader we would lose.
Posted by John Gray at Sunday, October 28, 2012