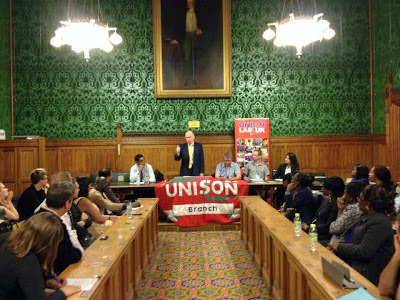 Jack started off by talking about his early days as a trade union activist in the famous 1970's Grunwick dispute. Ironically he has recently worked with as a shadow minister one of the Police officers who arrested him on that picket line.

He made a firm commitment that a future Labour Government will make housing central stage. Previous Labour governments did good things but they did not build enough homes. In the 1930's construction helped get the country out of recession. 2 million people in this country depend on this industry for their livelihood. There is an alternative economic strategy to that of the Tory coalition. He wants Councils and Housing Associations to both build more.

Housing Associations must keep their social care function and not end up like most mutual building societies did in the 1990's. Need to not only build homes but communities.

There was a lively Q&A and Jack overstayed his slot by 40 minutes.  There were members from nearly 20 different Housing Associations from all over London and East England.  My Question was about the poor governance in many (not all) Housing Associations such as Metropolitan which while  cutting front line staff wages, is making huge pay offs for failure to its senior managers while at the same time planning to recruit part time not full time staff so the state will top up their wages. Jack came back that there was good and bad associations as there are good and bad Councils. Good governance is a key issue.

He asked everyone not to judge the Labour Party so much on what they say now but on what they will do when they are in power.

Update: Check my tweets of event @grayee and photos on Facebook here.