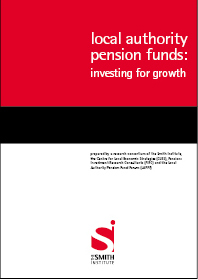 This morning I was surprised to hear Sir Merrick Cockell, Chair of the Local Government Association (and Leader of Kensington and Chelsea) say on the Today radio programme that he (personally) supports the merger of the £150 billion Local Authority Pension Scheme (LGPS) into 5 or so funds only. There are currently 101 different and separate LGPS funds.

He was being interviewed about a report from The Future Homes Commission  about the need for investment in residential property. He argued that to invest in such infrastructure you need massive scale. There are claims that this merger and investment could result in 300,000 more homes being built every year.

His comments are likely to be more than a little controversial in our sedate world of Council pensions. I am reminded of the bun fight in City Hall here between "merger-ists" and "merger deniers" and the epic battle earlier this month here between the "Wandsworth" Council bulldog and "Gentleman Jim" LPFA.

One side argues that if the schemes merge they will be big enough to invest in such infrastructure funds that will not only provide homes, a much needed boost to the economy but also increase returns and slash costs. The other says "rubbish", bigger doesn't mean better and small is often beautiful (and more democratic and responsive).

By coincidence on Wednesday evening I went to the Parliamentary launch of the report by the Smith Institute "local authority pension funds: investing for growth".  It makes a number of recommendations but broadly supports the idea of a "clearing house" and "pooled" LGPS funds to invest in social housing and infrastructure. Local Authority Pension Fund Forum (LAPFF) Chair Ian Greenwood made it clear at the meeting that the forum was "neutral" with regard to merger of its funds.

In the Q&A I made the point that the report itself didn't appear to address any significant beneficiary concerns and a major reason why pension funds can't already invest in social housing is that property fund managers don't want anything to do with "plebs" and only want to invest in shiny new shopping centres and warehouses. Comrade Michael Johnson threw his usual hand grenade into the proceedings by stating that the LGPS is an Empire run in the interests of the Empire rather than its beneficiaries.

Following this mornings report UNISON has quite rightly reminded everyone that the absolute legal duty of pension schemes is to act in the interests of its beneficiaries (not to make property developers rich).  While I am pretty sure that this does not mean that UNISON is necessarily opposed to such investment, those who propose it need to be damn sure that these investments benefit our members.

Out of the hundreds of organisations that are cited as contributing to the Future Homes report there appears to be no input whatsoever from those whose money it is being proposed should be put at risk?