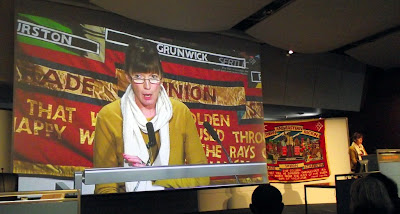 This morning I went to the Trade Union Congress Southern & Eastern Regional Council (SERTUC) as an UNISON delegate at Congress House.

Our keynote speaker was Frances O'Grady, the General Secretary (elect) of the TUC. This was the first time in living memory that any TUC GS had addressed our Council.

Despite being under the weather with a cold, Frances gave a cracking speech. Wide ranging, thought provoking, honest, passionate, but pragmatic.

I base this post on my tweets made during her speech with the usual disclaimer for thumb fumbling haste and any mistakes or omissions are my responsibility.

She firstly greeted us as "sisters, brothers and fellow plebs! SERTUC region is important since 26% of all trade union members live here. We need to act smart and inspire people. Work with different community groups. Even the Women's Institute. Our job is to turn opposition to Austerity into a mass movement and in the long term achieve a better, fairer society.

We must tackle growing income inequality. The top 10% are 500 times richer than the bottom 10%. While the City Spivs get massive bonuses the lowest paid have food banks. This in the 7th richest society in the world.

The "Spirit Level" book proves that such inequality is bad for everyone. We want tax justice. We want Starbucks, Amazon to pay their taxes.

We need a change in economic policy. Even the IMF, which is not known for being a left wing organisation, recognises that workers need to have money in order to buy things to create demand and jobs.

What we want is not only a transfer of wealth but a transfer of power. Why can't we have employee representatives on Company remuneration committees?

It is understandable, but we must be careful about the big danger from a decline in trust in politics. If people lose hope, it could be very bad for us and progressive politics. We have to be very careful about our language.

Any further mobilisation must be a demonstration of strength not weakness. We have to be clever and not burn out our members.

There are arguments that a general strike could be legal but this depends on European law and anyone with any experience of this, knows it takes years for these cases to be decided. Firstly we have to ask our affiliates if there is an appetite for action.  Also, if we have a general strike without a ballot, we have to be honest with people, that they could be dismissed if they take part. Union funds could also be sequested by Courts.  Any general strike cannot just be a public sector strike. It must be supported in the private sector.

Frances finished by making it clear that this is a weak coalition government and that there is widespread fear even in the middle classes, about such things as youth unemployment, housing shortage and the sharks such as Virgin, circling our NHS. If we go about it in the right way we can and will give this government a good kicking.

(Check out my twitter account for 27th October for a fuller report of Council. I did speak on the Austerity motion which I will post upon separately)
Posted by John Gray at Saturday, October 27, 2012