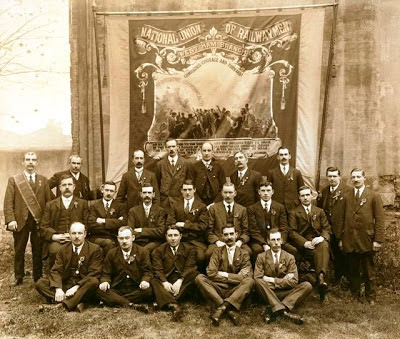 This is a great picture of the National Union of Railwaymen West Ham Branch strike committee
from 1919.

I wonder where it was taken and what the strike was over?  They appear to be wearing some sort of a
rosette.

Update: Mike from HPH has emailed me to say that the picture is originally from The Newham Story.

He thinks that the rosettes had union badges in the centre, points out the man with the union sash and the marvellous motto on the banner "Comrades, Courage and Forward"


National Railway Strike, 1919. This is the Stratford District Central Strike Committe Executive of the National Union of Railwaymen.

The second national Railwaymen’s strike took place at midnight on the 26th September 1919 primarily over the issue consolidation of war bonuses of 33 shillings. The strike being settled with the intervention of Downing Street on the 5th October 1919

would be great to know ??? can you find out John

I'll see if I can anon. I've googled Councillor Tom Kirk west ham (middle row) and found an interesting quote by him on socialism in google books "Labour Inside the Gate". Have a look.

Syd Williams, middle row in photo -I believe is my grandfather's brother 1884-1972.
I would love to find out more about this group. If it is my Syd he was a railway telegrapher, in 1911 described as a railway linesman. Born Forest Gate and always lived in the area. Never married.
Another brother was William Henry (Bill) Williams in 1920s secretary of the Railway Telegraph Engineering Com. Again remained unmarried.
My own grandfather was also a telegraphist - with the Post Office in Kimberley during Boer War and later on ships. Grandad wrote many letters to the press about political/social situations. They were quite a family - a hot bed of discussion.

How about posting the information and your request on below?

I will look out for more information. Not sure what to do?