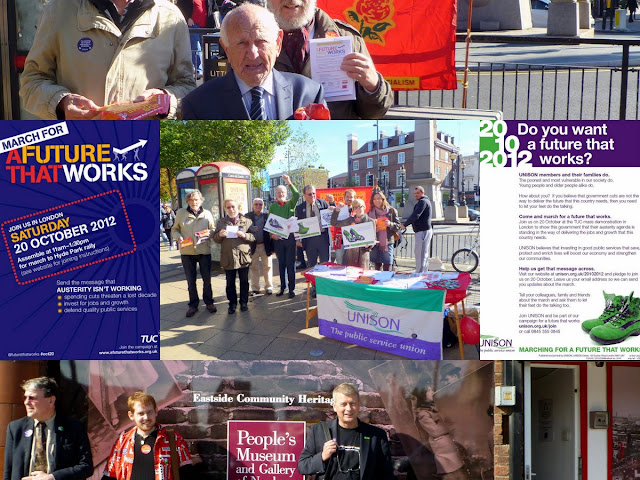 Collage is from today's stall and leafleting session in Stratford High Street, Newham, East London. Members of the West Ham Labour Party and local trade unionists were encouraging the public to join the TUC March for "A Future that Works" on Saturday 20 October. There was a UNISON stall and also next door a stall with Unite Ford activists from Dagenham and the NUT.

We gave out 500 joint Newham Labour/trade union leaflets supporting the march and asking people to meet again outside Stratford Station at 10am on the 20th October for those who want to travel together to the march with local Labour Party, trade unionists and residents.

We had some interesting discussions at the stall. The reaction from people who realised what we were about was very positive. However, most people passed by politely refusing to accept a leaflet, badge or sticker. While I think that this type of activity is still very much worth while, we need to find another way to reach ordinary working people about "the message" in a busy sunny Saturday shopping centre.

The message is of course not only to go on the March if at all possible but also that Austerity is not working and we need an alternative economic policy. I tried chanting "What do we want, Keynesian, When do we want it, NOW" but it didn't really work apart from giving me a sore throat.

It was good for me as a UNISON NEC member to deal with enquires and comments, not only the good stuff from people wanting to join or thank the union for the help they have received but also those who want to complain about the way they felt they had been treated. Only two problems out of many compliments but things are simply so horrible out there at the workplace that we have to be humble at times that things can go wrong - as they will with a 1.3 million wide membership under attack.

Picture on top of collage is of "Battle of Cable Street" veteran Max Levitas who joined us last year as well to support the TUC March in March.

Middle is West Ham Labour Party members and Councillors supporting the TUC March. There was also a stall in Green Street today by East Ham CLP.

Bottom picture is Alan, Gavin and myself after we had returned the stall materials and table to the West Ham Labour Party HQ which has temporarily been taken over by the excellent "Newham Peoples Museum & Gallery".

I am working class and proud of it. But many people are not and do not identify themselves with being working class.

It’s a name. It may have powerful associations with me and you but if it doesn't then it’s pointless and just silly if people not only don't get it but haven't a clue what you are on about.

We are all ordinary working people even if we are not working at any moment due to disability or unemployment.