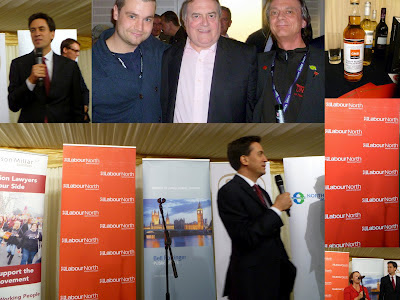 Still catching up from Labour Party Conference. The North Fringe on Monday evening reminded me of a proper traditional Labour Party event. Before Ed came to speak there was an auction and raffle. I didn't win anything, not even the GMB branded Whiskey!

It was also the only event I went to during conference that served bottles of Brown Ale.

Harriet Harman firstly thanked the region for its massive support for the Labour Party. When Ed came he told us that this was his 10th fringe of the night.
He also said how much he enjoyed the Durham Miners Gala and would return next year. 21 years was too long (since last Labour leader attended). He pledged to build new houses and get young people into work when the next Labour Government is elected.

Next was the World Society for the Protection of Animals (WSPA) Fringe. They had the World's only Parliamentary band MP4 playing. I must admit that I thought they were very good and didn't realise that they were amaters. Hope they are members of the MU!  There was a number of MP's boogying on down including John Healey, Mike Gapes and Caroline Flint. There were others who declined the spotlight.

Top picture is of my fellow Gog (north walian) John Prescott with UNISON Local organiser Joel Bodmer and UNISON SGE member Mike Davy. Afterwards we went to the Midland Hotel bar to yet again put the world to rights.
Posted by John Gray at Friday, October 05, 2012