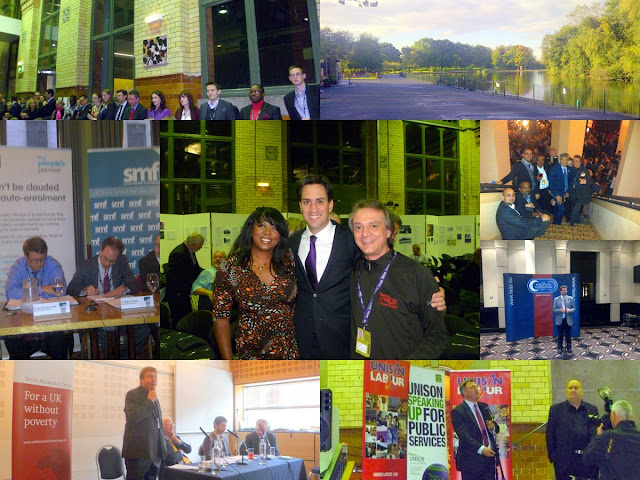 Once again I ran out of time during the 2012 Labour Party Conference to write posts on the last two days. So here is a quick summary of some of the highlights during the last few days of Conference.

Clockwise. Due to disorganisation and meanness I stayed in a hotel in Rushholme which had the worse reviews on Booking.com that I have ever seen. It wasn't that bad but one of the things that kept me fairly sane during Conference was a morning run around the fantastic City green lung Platt Fields Park (the Peoples Park).

Picture of Peoples Republic Newham Crew (and guests) in Midland Hotel bar stairs. Below Gerry Sutcliffe MP, speaking at the EU fringe for Azerbaijan (UK is the biggest investor) ; Ed Balls MP speaking to UNISON reception at the "Peoples History Museum". Ed admitted that he would have lost his seat at the last General election if not for the help of UNISON - "no doubt" and he pledged to never ignore anything that UNISON said but we would not always agree.

Then a very good and sharp fringe on ending poverty by Webb Memorial Trust (lost notes), another on pension auto enrollment with Labour Shadow minster Gregg McClymont sponsored by the Peoples Pension (lost notes); then picture of UNISON reception with Andy Burham MP and Rachel Reeves MP and final centre picture of the great leader with UNISON delegates Mike and Mandy. What a great natural relaxed smile Ed? We never knew!

Can you publish this general comment please on why we are losing members? Cheers

Why are unions losing members or perhaps why is it that union members lose faith with those they perceive as being part of the ruling bureaucracy?

The simple answer is that whilst many union activists on the front line are fighting to protect fellow workers rights those who are in a position to make things happen and help them when they have a work related problem take for ever to do anything. This is an endemic problem and one that full time 'orators' and followers of hot air who spend most of their lives up their own M25 should deal with.

I am currently dealing with a case of a low paid member who has been asking for legal advice on a matter to do with his employment position. This member is facing dismissal at the end of the month. We submitted case forms and requested legal advice more then 4 weeks ago but nothing is coming forward it's one excuse after another.

My argument is what is the point of having a revolution to save the class struggle when you can't be bothered to help an ordinary loyal member who needs support? And I know for a fact that this is not an isolated case. The orators who love the sound of their own voice and are so obsessed with the theory of revolution should do something practical and actively support a low paid member?? Do I f...g need me to state the obvious?? What is the purpose of the uprising if you can't save a single member?? No wonder more than half of those who work in public service don't bloody join!! Lets change that!

after the bopmbing of belgrade I stoppede voting Labour many friends tore up their party cards. anyone who didnt is a freebooter and liar and merits computer boy as leader.We need something honest and new, Labour is swindling its voters, look at Newham!!!!!!

and what a sad, sad loss superchick it has indeed been to the Party to have such eloquent and intelligent supporters of genocide leave.