Lab12: TULO reception (and the move to the right) 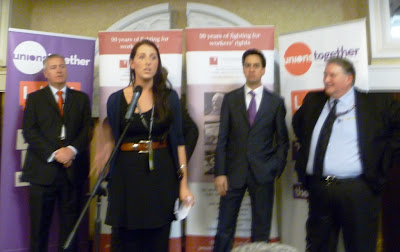 While waiting for Ed Miliband to come and speak to the packed out fringe organised by TULO (trade union liaison organisation). General Secretary of the CWU, Billy Hayes, made a request for the Labour Movement present to move to the right (and stop blocking the doorway to people trying to get in)

Harriet Harman spoke first about the need to get the Tories out and how the unions can help especially in areas such as East of England where we are still strong but the Labour Party are weak. She also made it clear that she wanted Labour MPs to be as representative and diverse as our voters.

Which was a theme taken up by Billy and GMB General Secretary, Paul Kenny. Who both made it clear that there must be more working class and trade unionists MPs. Paul said "People who know what its like to be shouted at by their bosses".

Ed talked about taking the fight to the Tories, need for self discipline, build more homes and make Banks serve the public, not the other way round.

Highlight was a rousing passionate speech by Laura Pidcock (see picture - sorry about quality) who reminded us that if MPs don't understand, talk, look or sound like working class people then they will not vote for them.
Posted by John Gray at Monday, October 01, 2012