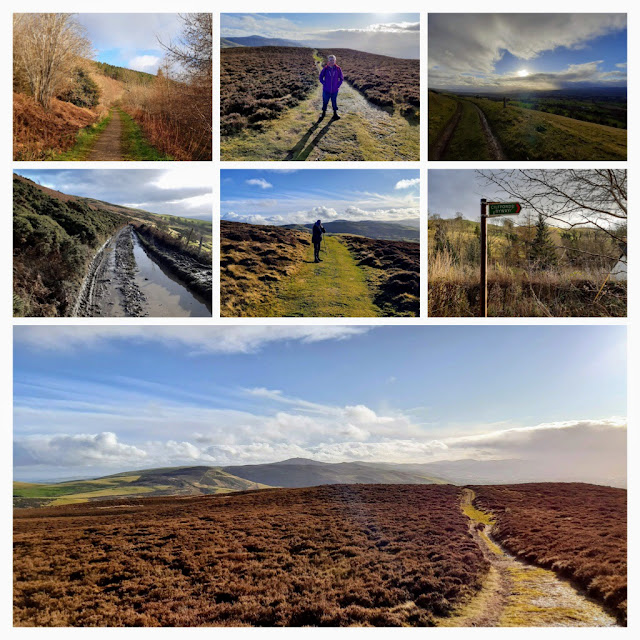 Off message but spent Christmas in North Wales visiting family. In between visits (and eating and drinking lots) Gill and I had some fantastic walks. We hired a cottage near Llanwyfan which is about 4 miles from Denbigh. There use to be a large TB hospital at Llanwyfan (I will post on its remains another time).

We could start hill walking from the cottage. On the Sunday we walked left along the country road then up a footpath to climb to join the Offa’s Dyke path (a long distance footpath that goes across Wales) to the Iron Age hill fort Penycloddiau. You can still make out the earth defences of the fort. At the top is a modern monument to mark a Bronze Age burial mound. The views were also spectacular. You could see Liverpool in the far distance. The weather was lovely (as always in Wales of course).

We then walked down along Offa’s Dyke path and turned back along the Clwydian Way. Which was very muddy in parts but the views of the Vale of Clwyd were stunning. The mud was probably due to 4 wheel drive “enthusiasts” churning up green lanes and tracks. We could see a convoy in the distance and during another walk we actually came across a convoy.

A few years ago we were walking along this same track when BBC radio rang wanting to interview me on housing workers facing violence at work. Much to Gill’s annoyance she had to stop and wait until the interview was over (they never used the clip after all that).

The track took us nearly right back to the cottage. The walk was about 5 miles long with only 1 real climb uphill and took about 2 hours. Perfect little walk.