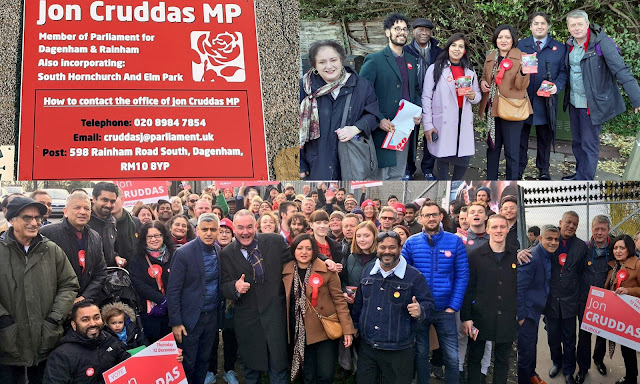 Today I was with Newham Mayor, Rokhsana Fiaz & comrades from East & West Ham (and other parts of London) to support Jon Cruddas, Labour Candidate in Dagenham & Rainham. London Labour Mayor, Sadiq Khan, was also there.

After the obligatory photos, we went off in a Newham campaign team. I was "running the board" (giving out names and addresses for canvassers to call upon to see if they are supporting Labour and then recording the result).

We only got hopeless lost once (I blame google maps). We found our destination the traditional way by asking a local shop keeper!

The round was mostly blocks of flats which are notoriously hard to get through the entry door but residents were (mostly) happen to "buzz" us in so we were able to talk properly to them.

Dagenham & Rainham is a Labour held "marginal" and Jon has been the MP for the area since 2001 (obviously he is now not an MP following the dissolution of Parliament for the General Election but the Labour Candidate).

I found support for Jon and Labour to be strong and he is obviously respected as a hard working Constituency MP but we should not take any marginal for granted. I left slightly early to be a UNISON speaker at a Trades Council Rally against public sector cuts.