A view from the right 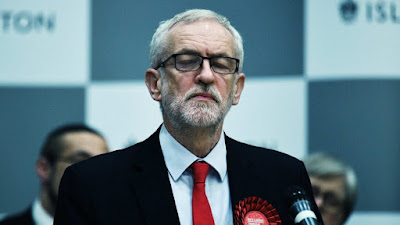 Labour should not have lost this election. Only once before has any modern British government going for a fourth term won the approval of the voters. Real wages have been stagnating for years (though they are rising now). Prime Minister Boris Johnson is deeply unpopular. Public services, especially the National Health Service, are in a mess. And yet the official Opposition was not just defeated – it was utterly eviscerated. How can this have happened?
The explanation is complicated, despite what you might hear from the crossfire of the Forever War that has raged within the Labour Party since at least summer 2015. For their part, Labour’s leadership wants to make this all about Brexit – to say that the party’s pivot to a second referendum alienated Labour’s Leave voters, especially in the North of England. Shadow Chancellor John McDonnell was on the BBC making this case within moments of the exit poll breaking.
They are doing this because they want to avoid blame themselves. But their self-serving excuse is a gross oversimplification at best, and a total nonsense at worst. According to pollsters Datapraxis, Labour lost between 900,000 and just over a million of its Leave voters: but 1.1 million of its Remain supporters. And between 200,000 and 250,000 of those Leavers went to the Liberal Democrats or the Greens – hardly an indication that a hard-core Leave policy would have scooped them all up.
In fact, two interrelated crises blew up in Labour’s face this year. The first is a long-term dealignment of lower income workers from Labour and labourism, speeded up by Brexit and reflected in those defecting Labour Leavers; the second is its sectarian and closed-minded leadership clique. Either one of these would have weakened the party: taken together, they blew its electoral coalition apart.
Labour went into an election with Jeremy Corbyn as the most unpopular Leader of the Opposition ever (at a net rating of -60). It alienated voters and party members alike by insisting on installing favoured Corbynites over local choices (as in Bassetlaw), even as it sent its activists into an offensive battle that they never had a chance of winning.
Labour ignored its own internal polling. Karie Murphy was moved from serving as Head of the Leader’s Office to headquarters with zero experience of ever running anything like an election campaign. Only in the last days of the campaign were defensive ditches dug in Labour seats. By then, it was far too late.
Labour is now so deep in a hole that the light must look like a mere pinprick: it would need to gain 123 seats on a swing of over 10% to gain a majority, and 75 seats to govern in alliance with the Scottish National Party (if the latter again returns 48 MPs). To gain even the latter objective, it would have to overturn the Conservatives’ majority of 5,507 in Northampton North on a swing of 7%. To put that into perspective, that would be the largest national change since 1945, with the exception of Tony Blair’s 1997 landslide.
There is no hope even of minority government without winning back many of the seats Johnson wrested from them last week. These towns – and for the most part they are towns – are resentful of London’s dominance of the economy and national debate; feel the economic and social life draining out of their high streets and communities; experience every day their pathetic public transport and have gained the impression that Labour actually disdains, if not despises them.

What can the party possibly do to win them back? Perhaps the answer lies in detail. Labour offered everything to everyone this time, in a highfalutin melange of absurdist promises that floated far above people’s actual lives. Free broadband? Free tuition fees? Free school meals? Cheaper train fares? We can deliver it for you wholesale, all at the same time, right away.
As soon as they printed their dozens of fantastical pledges, Labour not only detonated its own credibility, but also removed the moral and contractual leaven of what they were doing – when they could have focused on elderly care, better hospitals, smaller class sizes, more reliable buses. It was no wonder that many voters assembled for focus groups simply laughed when shown Labour’s promises. Contrary to one’s normal advice, the Left really should sweat the small stuff.
For the big offer that you could ‘win a speedboat’ never touched the sides. Indeed, in a strange way, it made things worse, because all the big talk and the huge pride-before-a-fall came across as somehow patronising, another trick from a untrustworthy political elite. They drove straight into the tank trap that the Prime Minister’s chief adviser, Dominic Cummings, had dug for them.
Cummings wanted the election to face ‘the politicians’ with ‘the people’. So Labour said they’d reorder the economy and nationalise the utilities – that they would do things to the country and to people, rather than let people (shall we say) take back control over their own lives. In an election that saw province and periphery revolt against centre in so many ways, Labour’s impression of statism and centralism was fatal.
So Labour has big problems. But it has small problems as well. Any new leader must address both if they are to have even a hope of success. They must talk in a language people can understand about the real issues affecting their lives, promising legible rather than ridiculous changes, clearing out the entire upper echelons of the party’s management. Can it be done? It is possible. But as Labour’s inner circle go to war to protect their legacy, and the party’s many factions gear up to put their own case, the early signs are deeply gloomy. The British Left may have to toil in the wilderness for a while yet.

The people were crying out for leadership and Corbyn failed them. Jeremy lost the plot when he excepted the Blairite "another referendum" nonsense. Very sad ending but it was obvious the people wanted to leave Europe. It was also a certaincy he was going to lose. After all, didn't the people vote to leave Europe. In the end, Corbyn didn't deserve to win because he surrendered to the enemy within. An enemy, who's soul purpose was to destroy him and labour and they succeeded.