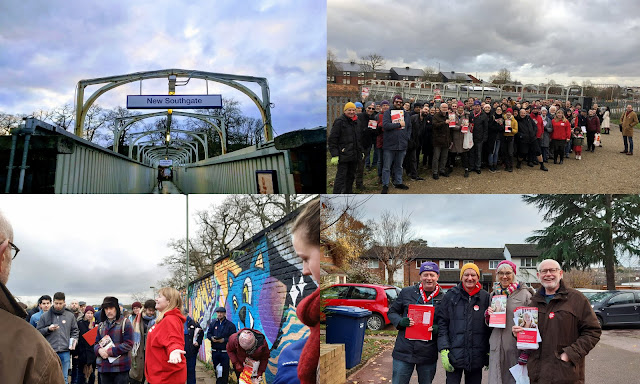 This afternoon I went to support Labour Candidate, Emma Whysall, in the most narrow Tory held marginal in London, Chipping Barnet. Emma lost by only 353 votes in 2017 to hard line Tory Minister, Theresa Villiers.

Emma gave activists a stirring speech before we went out to canvass. The latest polls are putting Labour and Tories head to head at 41% each. (usual warning about accuracy of polls)

I was a "board runner" today with a team of 3 other Labour Party activists. I don't mind doing the board (telling other members of the team which homes to call upon and recording the result) but I prefer knocking on doors and speaking to people.

We had some good results and were able to identify new Labour voters and reaffirm existing supporters who are still Labour. So lots of supporters to "knock up"on polling day and encourage to vote.

Check out future canvass events for "most marginal seat in London" Chipping Barnet here. I was really impressed how organised and friendly everyone was.
Posted by John Gray at Sunday, December 01, 2019