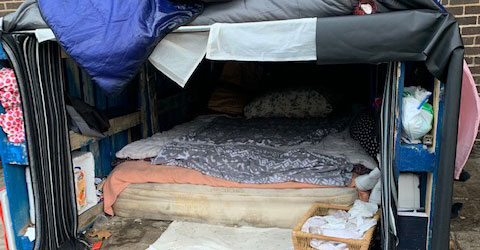 ​It is the first time in a decade that Newham has had a dedicated Homelessness and Rough Sleeper Strategy, and is the product of new priorities set by the current administration.
A considerable amount of work has been done in the areas of homelessness prevention, and in particular rough sleeping. The strategy has compassion and care at its core and has been drawn up with the support of the homeless charity Shelter. It will cover the period December 2019 to December 2021.
Newham faces enormous challenges on two fronts, first on the issue of people experiencing homelessness, defined as anyone who does not have access to suitable accommodation.
Shortage of social rented property, high private rents and benefits changes have pushed more Newham residents into homelessness, which has resulted in over 27,000 households on the council waiting list and more than 5,000 in temporary accommodation at a cost of £5.5m a year to the council.
The council is committed to increasing the number of genuinely affordable social rented homes in the borough, and plans to build at least 1,000 such properties by 2022 are in place with some building work already under way.
The more visible challenge facing Newham is the rise in street homelessness. Since 2015/16 levels of rough sleeping in Newham have increased by 135 per cent.
There is a particular concentration of rough sleepers in and around the Stratford Centre due to the availability of shelter and food, 24 hours a day. Stratford is now well known across the wider rough sleeper community, drawing people in from outside the borough and creating one of the largest rough sleeping hotspots in London.
To tackle the two issues Newham’s strategy has been split into two, with an interim programme, and a longer term plan.
The interim programme is already under way, tackling the immediate and urgent issues like implementation of the Homelessness Reduction Act 2017, and measures to deal with rough sleeping.
Rough sleeping presents acute health and safety threats to those bedded down on the streets, with people vulnerable to crime, violence, exploitation, drug and drink addiction and mental illness. In a bid to reduce the number of people facing these dangers, Newham Council has:
Colin Ansell, Corporate Director of Adults and Health for Newham Council said: “The Council is working from a historically very low base of provision for rough sleepers and homelessness prevention.
“This administration has prioritised this provision, and alongside policies designed to increase the availability of genuinely affordable property, it is committed to reduce the need for anyone to sleep on the streets, or face the threat of homelessness.
“We have a long way to go, but with our partners and community support we are determined to improve the current situation, both in the short and long term.”