A view from the hard left 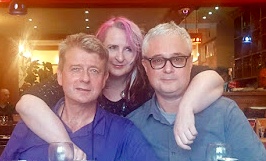 “For the hard left - and yes, I’m proudly part of it - it’s time to wake up and smell the Nicaragua Solidarity Campaign organic fairtrade coffee.

For the second time in four years, a leadership drawn from our side of the party has led Labour to electoral devastation.

Unless we somehow find a way back from that, and to win next time, our vision for Britain faces obliteration as definitive as that witnessed under Thatcherism. It’s a painful undertaking, and it begins with owning the defeat.

The urgent first move is to eradicate anti-Semitism, mainly because that is the right thing to do anyway. But even on the base level of electoral calculation, it’s costing us seats.

Never again should Labour canvassers feel trepidation when knocking on a north London suburban door to which a mezuzah is nailed.

Then, stop stitching up selections, which demoralises activists, but impose rigid quality controls where local parties make the choice, because it’s better than having to disown wronguns' mid-campaign.

The everything-but-the-kitchen-sink manifesto was an unforced error. The message was too diffuse, too much to take in. You really can have too much of a good socialist thing.

Recognise that the ‘MSM’ is called the mainstream media for a reason. You do not single-handedly offset the impact of the millions of Tory-leaning newspapers sold every day by phoning amateur hour spindoctor hot tips to uncritically adulatory one-man websites.

But one factor dominated everything else. Sadly, the few who foresaw the extent of the kicking about to be imparted on account of Brexit were dismissed as namby-pamby nay-sayers.

In hindsight, we’d have been better served shucking off the Lib Dem guilt trip and sticking to the 2017 position of respecting the result. Ironically, that was probably Jeremy Corbyn’s private judgment as well. Yes, it would have hurt in London and the South. But voter haemorrhage would have been less severe overall. All that is by the by anyway. Hard Brexit is now happening whether we like it or not.

Disaffection among what New Labour euphemistically dubbed ‘the heartland vote’ hardly commenced under Corbyn, of course. The malaise dates back decades, allowing the Brexiteer-led ‘party of the metropolitan elite’ critique to gain traction.

Scotland looks a lost cause for at least a generation, after Ed Miliband’s disastrous decision to campaign alongside the Tories in the 2014 independence reference. The Red Wall may not be so beyond repair, but won’t be rebuilt by London calling to the faraway towns.

Where we should not resile is in justifying Corbyn’s four-year stint as leader. Indeed, if you want to get all Marxist about it, you could even call it historically inevitable.

By the 2000s, Labour had moved well to the right of where any left of centre party ever has any business being. Without what City pages call a long-overdue market correction, it would likely be languishing with the sort of single-digit poll standings afflicting many continental counterparts. Even after this week’s collapse, its vote share remains higher than under Brown and Miliband.

It’s not Labour’s reloved economic leftism that is unpopular. If it was, the Tories would not have ditched four decades of orthodoxy and pay lip service to tax-and-spend economics, solely in the name of electoral expediency.

So to paraphrase a popular National Rifle Association bumper sticker, New Labour can have the party back when they pry it from our cold dead hands.

Yes, Corbyn himself has made it plain that he is going, and the ‘process of reflection’ may prove shorter than he ideally wishes. Luckily the hard left retains sufficient membership support to secure the succession.

Rebecca Long-Bailey will likely be designated to carry the flame, but needs to prove she is more than merely a favourite daughter. The right may well stand Jess Phillips, who possesses bucketloads of the charisma Long-Bailey transparently lacks. But some rightists fear her overtly confrontational style makes her too divisive a proposition.

So congratulations, Mr Johnson. You now have your mandate to Get Brexit Done, open up the NHS to US Big Pharma, get us all eating chlorinated chickenburgers, create a Singapore-on-Thames that will reduce much of Britain to Detroit-on-Teesside, and such other deleterious schemes as may strike your fancy.

Just don’t forget that most of the electorate didn’t vote Tory, and you may only have your parliamentary majority on loan.

David Osland is a former member of the Labour Representation Committee national committee and ex news editor of Tribune
Posted by John Gray at Sunday, December 22, 2019

What a wonderful view you have from your office John. I'm sure you can see the queues at the food bank and the freezing poor huddled with no heater on. Well done.

..."open up the NHS to big Pharma"? What does that entirely vacuous statement actually mean? Don't we want to ground breaking cancer treatments and drugs that big Pharma develop? Don't we want the next generation of antibiotics developed by US Pharma? Don't we want the next generation of Tuberculosis drugs.. because TB is steadily becoming drug resistant. The statement is completely meaningless. How many cancer busting drugs did the generic drug producers develop? How much do they spend on research? Zero. What do you think Pharma companies do at the moment with pricing, do they just let the NHS chose what it pays?
That's the problem with your mate, he's adopted a Party slogan without understanding anything whatsoever about it. God help all the women who will develop breast cancer in this country and need access to US big Pharma if Labour ever get in.

It’s a more than fair concern that Boris will sell off the NHS to USA big business in return for a trade deal from Trump. Of course Boris and Trump both say this would never happen! So it must be ....

What a load of rubbish. Many of the biggest Pharma companies in the world are British and not US companies! What are they going to buy?..the buildings, the cleaning services, the people? It's a completely vacuous statement born out of labour doctrine _ USA bad, Venezuela good. Its meaningless scaremongering. You treat the electorate like we are morons with these vacuous statements.

John. That's about the most pleasantest comment you have return me since I started arguing with you around 2006.

Merry Christmas and all the best for 1820.

Well, I clearly remember the USA ambassador to UK saying he expected access to UK health services to be a precondition of any bilateral trade deal

What is feared is that even more NHS services will be privatised as a condition of a US trade deal. If you want an American Private equity company running your local GP surgery that is fine. After all they did such a great job running care homes...

But that's not what Corbyn said... he said "US Big Pharma" will be running the NHS. He never mentioned US private Equity Companies running GP surgeries?
The problem is that the Labour policies were negative scare stories - "the NHS will be sold".. and it was clearly crap. Waffling on about Private Equity companies just shows you can't explain the statement either.

Yep and it looks like Boris is going to open up the NHS to Big Pharma. Price fixing monopolies many of which dependent upon PE. Coming soon to run your local NHS services.

People did understand risk to NHS but thought Brexit was more important and didn’t think Jeremy could deliver on NHS promises either.