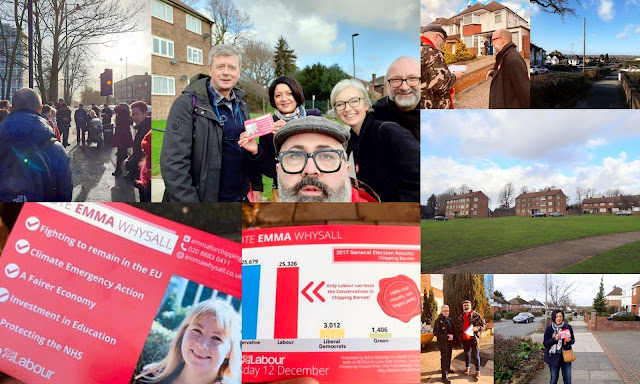 Today I went with on a canvass team for Labour Candidate, Emma Whysall, in Chipping Barnet. Newham Mayor, Rokhsana Fiaz also joined board Leader, Graham Taylor, who is the Parliamentary agent from Bethnal Green & Poplar. I have known Graham for many years and as a former Tower Hamlets Council Housing officer, I even used to manage the tower block that he lives in.

We were in classic outer London suburbia with lots of large houses. I spoke to a number of residents who I think were genuinely undecided. Sometimes when door knocking you feel that people say they "don't know" just to get rid of you. I didn't think so on this occasion. Remain/Brexit is obviously an important issue and some made it clear that they were considering tactical voting.

I knocked on the door of a family who explained they will probably not vote Labour this time because they want to send a message to the Party about antisemitism. They fully accepted that Emma was an excellent candidate and that they may still vote for her since the right wing Tory candidate is so "awful".

While this is obviously an affluent area to live in there were homes which had been converted into HMOs (Houses of Multiple Occupancy) and others which were clearly in a state of disrepair. Owners may have a property which is worth a lot of money but no income to maintain it.

We finished off canvassing a newly refurbished Council housing estate (Barnet Homes ALMO) which reminded me of similar blocks back home in Newham. The Mayor and I were impressed with their stair rails and flooring which I will investigate further for use back in Newham. 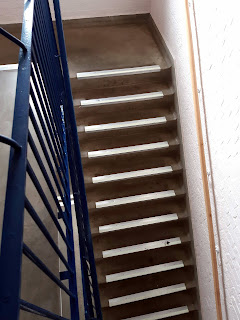 After the canvass I went back to West Ham to pick up and deliver "Vote Lyn Brown" leaflets to activists for them to leaflet their local streets, railway stations and school gates next week.  While we will be campaigning daily in West Ham, we want as many activists as possible to go to nearby Labour marginals. The next few days will be key and we simply have to win the marginals to form a Labour Government. I firmly believe that we can still do it and that there is still everything to play for.
Posted by John Gray at Sunday, December 08, 2019