"If you desire a coloured for your neighbour Vote Labour": Lambeth Tory leaflet 1964 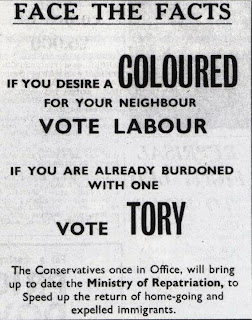 Hat tip to Hayes People History. It is hard to imagine that such leaflets were handed out by a "mainstream" political party to the public within my life time (just).

There was of course even worse literature handed out during the same election in Birmingham 1964. This Tory, Peter Griffiths, won but was later defeated in 1966. However, he later went on to become a MP elsewhere for 20 years!

After he won in 1966 according to Kester Brewin "Griffiths was told to be expect to serve his time in Westminster as a ‘political leper,’ – something that enraged Labour MPs to sign a motion that this was “a cruel and unmerited slight on lepers.”

Very sad to say but the Phil Woolas campaign leaflets in 2010 were a variation on this. No principled Labour activist should support the appeal launched by Woolas's MP/MEP cronies.

No "very sad" they were not a "variation" at all. They were wrong but nothing compared to 1964 or the rubbish put out by Lib Dems promising to get rid of tuition fees.

Leave it to the courts to decide.

We can judge for ourselves and know 'dog whistle' racism when we see it..

dog whistle maybe but not overt racism like the tories. he was actually kicked off for knowingly telling untruths not racism.

The Conservatives were in office in 1964 up to the October election. Assuming this is from the London local elections in May why would they say "Once in office we will set up a Ministry of Repatriation"?

And it looks too old-fashioned for later in the 60s, and I'm guessing after Powell's speech they wouldn't have been stupid enough to go talking like this.

So either Hayes have the date wrong (it looks so old-fashioned it must be from 40s 50s or 60s, but the Tories were in power 51-64 and immigration was hardly an issue before then) or, more tantalisingly, could it be the equivalent of those red or blue leaflets put out by Lib Dems - a false flag operation from the Tories opponents?

A very interesting puzzle. Thanks for posting.

Far more likely to be a local leaflet for 1964 General Election – just like the Tory "n****r leaflet? Why deny your heritage anonymous?

Err - they didn't say "Once in office we will set up a Ministry of Repatriation"?

why have you done this?

remember the labour bombing of belgrade if you want racist

john sorry to be rude but you are not even there mate, that was the last time i voted labour

No I wasn't superchick but that doesn't mean it didn't happen.

im left wing but id honestly vote tory before you

The Labour Party can do without apologists for mass murder and ethnic cleansing thank you very much.

Find this fascinating but frustrating, would love to pin down the exact source. It seems to be a newspaper ad, not a leaflet - text visible from the other side is cut off by the ad's bottom edge.

As Other Anon said, "once in office..." implies the Tories weren't in power when it was published - but why should we expect whoever spelled it "burdoned" to get every detail right?

I've had an email from Michael that it was originally a leaflet that was republished in a book on contribution of overseas workers to the NHS - circa 2000 (he has forgotten name).

He thinks that the source for the leaflet credited in book was Lambeth Library.