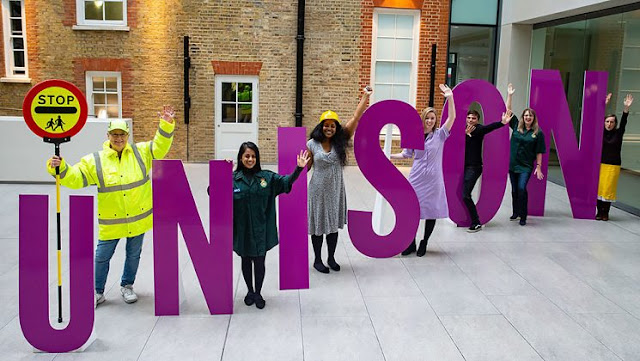 Firstly, apologies that I will have to leave this meeting early as I have to travel to Bournemouth today to attend a Pension Conference.

This was the first full meeting of the new NEC at the UNISON centre. There was still problems in the centre following the recent flood which has damaged the lifts.

Following notice of obituaries, the General Secretary, Dave Prentis gave his report to NEC. He noted that UNISON is now the biggest trade union in the UK and that we have some 80,000 more members than the next biggest, Unite. Also, despite the fact that some consider us not to be a “militant” union we actually take more industrial action than all over unions put together! He spoke about our award winning legal services; our anti-racism work with “Hope Not Hate”; our support for WASPI pension rights; 100 years anniversary of Council Housing and UNISON’s ongoing support for the Durham Miners Gala.

Brexit is of course a huge issue and the prospect of a “No deal” could threat the peace process in Northern Ireland, cost private sector jobs, cut our income from taxes and therefore destroy public services. While a trade deal with Trump would mean the privatisation of the NHS. In the discussion I pointed out to the NEC that in the Community sector fears of Brexit had already caused housing associations to stop new housing projects and lay off staff.

There followed a debate about whether UNISON delegates at the recent Labour Party conference had followed or not our “policy” on Brexit. Delegation leader, Gordon McKay, made it clear that we had and apart from some silliness this was accepted by NEC. Dave spoke about the massive spike in our online membership during the conference debates on Brexit.

In a debate about the Climate change emergency I reminded the NEC of the absolute importance of ensure a “Just Transition” and that there are well paid and skilled “green” jobs to replace those currently dependant of carbon. If not this could derail change. Remember that Kentucky coal miner’s had helped Trump win in the USA and the French “yellow jackets” who had successfully wreaked increases in carbon taxes. Due to austerity many working class areas believe that they have been betrayed by society with low paid, insecure and exploitative jobs as well as rotten housing.

The debate on Brexit was I think the longest in my experience on the NEC with a wide range of views expressed but the vast majority of NEC members were supportive of UNISON on this issue while recognising that our members held a range of legitimate views.

The rest of the meeting had to be rushed. There was positive reports about recruitment and updates on our pay and industrial action campaigns.

The next NEC meeting was put back due to the General Election clash and will now take place 18 December 2019.

If any branch or regional Community branch wants us to attend any meeting or events (especially campaigns or industrial action) then let Denise and I know and if we can, we will attend.

Industrial Action Campaign Committee (IAC): As vice chair of this committee I have continued to support branches and services groups to take industrial action up and down the country. Note our record on action (Page 1 Para 2).

PDCC I was unable to attend this subcommittee.

I respect the fact that UNISON has members from all political parties and traditions. However, I will say that this is a really crucial election to all union members, especially those in Community. In my view not only is the future of our public services such as the NHS under threat but our voluntary sector and our trade union will find it difficult to survive if we have a Uber right wing government in power for the next 5 years.

Please go out and campaign in marginal seats for candidates who want change. (I think members of the SGE can guess who I want them to campaign and vote for).