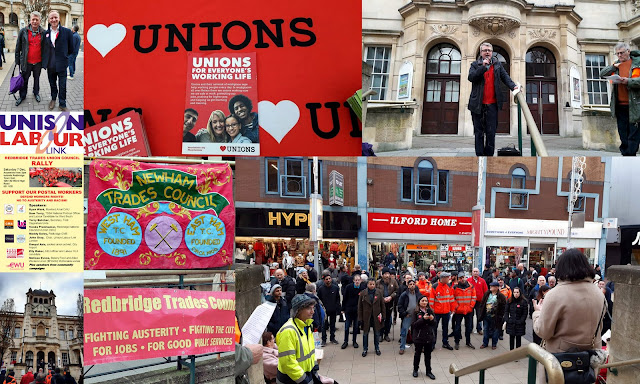 This afternoon I was invited by Redbridge Trades Council to speak at their rally outside the Town Hall in Ilford against public service cuts & in support of postal workers.

As Chair of London UNISON Labour Link (our union Labour Party supporting political fund) I offered solidarity to Postal workers and spoke about the Tory cuts to the NHS which has resulted in:-

horrendous reductions in services such as the longest ever waiting times for GP appointments & A&E admittance, Cancer patients not being seen in accordance to targets (and 10,000 fewer doctors).

As a Housing trade union activist I was also able to point out that this current Tory government has since 2010 built the least homes in the country since 1923; in the last 5 years they have only built 40,000 Council or Housing Association Homes compared to the 142,000 that the last Labour Government built in their last 4 years.

Labour are committed to building an average of 155,000 social housing homes per year with 100,000 being Council houses at Council rents.

It was good to meet up with Redbridge trade union and Labour comrades as well as our Labour Candidate for Ilford South, Sam Tarry. Hat tip to Pushpa for photos and video.

It was great to be invited to such a well organised trade union rally.
Posted by John Gray at Saturday, December 07, 2019

You are living in a dream world

LOL An anon agreeing with himself about la la :-)