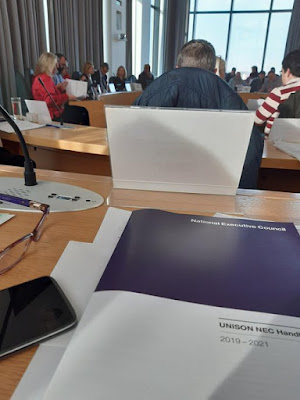 On Wednesday there was a post general election meeting of the UNISON National Executive Committee at our headquarters in Euston. I hold one of the two elected NEC seats for UNISON members who work in the UK Voluntary Sector and Housing Associations.

The NEC was supposed to  have met last Thursday 12 December but for obvious reasons it was postponed until this week.

The General election result dominated the meeting. In order to move business along, our President, Josie Bird, asked NEC members not to make detailed arguments why they thought Labour had lost the election since we need more time to reflect and need to concentrate on what to do next. However, many members, particularly those who lived in the previously rock solid Labour heartlands did give chapter and verse on the calamity.

I gave my pennyworth as well. Firstly, I made a joke since everyone was so depressed. I had stolen it from a colleague of a certain age, who had said the 2019 result was the worse since 1983, but at least in 1983 we had a really good music scene to lighten the defeat. I pointed out that this defeat was actually the worse since 1931 and I have no idea what music they had at that time.

My point was that I have no firm views on who should be the next leader but I want someone who can unite the Party and win the next general election.

Where I live in Newham, East London (population 359,000), a report this morning from housing charity Shelter found that 1 in every 24 of residents are homeless. 1:24!

We need a Labour government in power to tackle homelessness and poverty. No if's or buts.

The former head of MI6 said Corbyn's CV would have automatically disqualified him from applying for any type of role in the service because he was a security risk!... and this anti Semite was your candidate for PM?...and you are wondering why you lost? You couldn't make it up!

As for making things up...

So glad that David Lammy has thrown his hat in to the ring. This just gets better and better!! I wanted Rebecca Long Bailey but Lammy would just be awesome.

Rebecca and David are credible candidates. Probably not my 1st preference but why not a northern women and why not a black male?

Nothing wrong with their gender nor ethnicity..though I actually support them because they are so balanced. They are sure to pull labour out of the mire.

Didn't Lammy and his badly thought through intervention into Comic relief result in £8m less raised in 2019..? I'm sure all the people in desperate need were impressed with that piece of naïve puritanism. At least he won the moral argument though, and that's the main thing!
Right On comrade.

So he doesn’t have a point then? Not entitled as a black person to give his view?

He described Jacob Rees Mogg and other senior politicians as "worse than the Nazis" on the Marr show... but that's just the nasty party for you... so, yes, he's entitled to his view, but Mr Lammy has become the very thing he claims to oppose: a shrill, unreasoned, over-emotional propagator of loathing towards certain sections of the population.