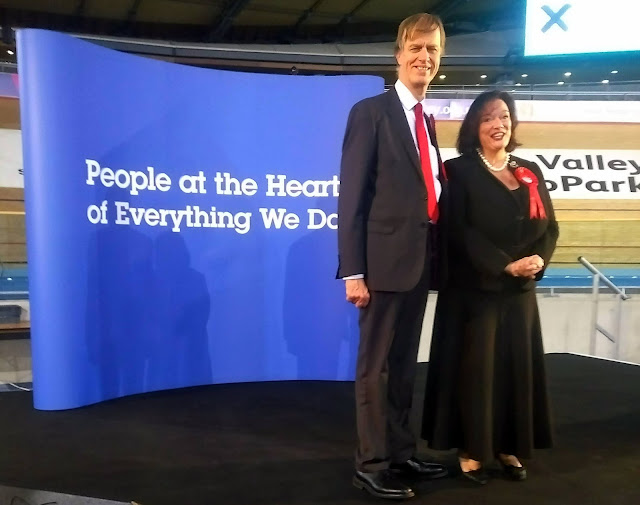 Congratulations to Lyn and Stephen for their "Landslide" victories for Labour in West Ham and East Ham (both in the London Borough of Newham).

However, as soon as I saw the exit poll on the 10 O'Clock news last night I knew that Labour nationally was going to be heavily defeated. At the time we were briefing our count agents on sampling so had no time to stop and think, we just had to get on with the count.

To echo many thoughts I have read today, we need to now lick our wounds, reflect on our national defeat then come back fighting.

I am desperately sorry that we did not elect a government that for example would let Newham Council build the 27000 (plus) homes that we so desperately need. However, again, we just have to get on with it and fight to protect our public services while serving our community. We will hold Boris to account.

I will post further on the day itself and the count another time, however as West Ham Labour Agent many thanks for all the hard work by all our activists, near and far during this election. Also Newham Council staff for their public service before, during and after polling day.

I recall "Bring it on" was one of your comments on this election... how wrong can you be.
In "your own dreamworld" was one of the comments posted. Couldn't be more accurate. it was obvious labour was going to lose and they did - lose big! Why? Hamas, IRA, Corbyn, anti Semitism, and the Militant puritanical zeal that prevents anyone from talking about anything sensible in Labour. No one buys the lies and no one believed the ridiculous spending pledges. Free broadband, cancel tuition fees, free social care at home, billions for WASPI women, billions for the NHS, billions for everyone...but only a very few pay just a little more. No one was taken in, and you have been delivered our verdict. The worst labour result since 1935.

Nope, it is the job of the opposition to call for elections. The main reason for losing is clearly our policy on Brexit. We will have a new leader and new policies for the next election and next time we will win.

You say that John but you have been on the wrong side of the argument for months, convinced in your Newham bubble that the rest of the country are the same as the inner city. Look back at all your posts in the run up to this election and see how you misjudged it, both you and Labour. The country hated Corbyn because Corbyn hated the country. He couldn't even bring himself to sing the national anthem, and he was unpatriotic and directly linked to terrorists who wished the UK harm. There is no denying this, it can't be dressed up. It is what it is. The hard left manifesto was also regarded as a cynical attempt to buy off the electorate, infact the only thing that wasn't offered by Labour was a free holiday for everyone in Venezuela, and the Labour heartlands have delivered their verdict. If all this was down to Brexit then how come Labour lost the last FOUR elections? I think you would do well to reflect...Kinnock got it right in 1985 at the conference about unachievable promises.

Yawn. You are just ranting again. Jez as leader has taken responsibility for the defeat and is stepping down. Brexit was definitely a problem and people were not convinced about all our policies.

We will elect a new leader and we will review our policies. We lost the election. It happens in a democracy. Get over it.

John, Labour were close to being annihilated as a Party... You lost the arguments and now we have the spectacle of your few remaining MP's ripping each other apart in public. Personally I'm seriously hoping Rebecca Long Bailey wins the leadership race because it will be the end of the Party... fingers crossed. Four election losses!! and that was all Brexit??

Now you are being just silly. Labour got over 10 million votes, more than Tony Blair got in 2005. We lost very badly but we have been here before and will come out of it again and win.

Fingers crossed for a Rebecca victory!!

she got Caroline Flint's endorsement

I sincerely hope Rebecca gets elected, because that should really help turn around the following...
Ed Miliband’s 14,000 majority in Doncaster became 2,370. Yvette Cooper’s majority of 14,499 in Normanton, Pontefract and Castleford was reduced to 1,276. Labour chair Ian Lavery’s 10,000 in Wansbeck is now just 814 votes.
Labour are close to annihilation.

Caroline Flint?...great example. She is no longer an MP thanks to Corbyn and the hard left.. this is the problem that you need to get to your head around john.

Thank you very much for your interest in the future of the Labour Party. I am sure you are a really a shy socialist and one day will find the courage to come out as a true red. In the meantime you are getting rather boring and obsessive. So please troll off and play elsewhere

"I believe we can do it and we still have everything to play for!" said a well known blogger, and with your help and input Chipping Barnet's Labour candidate managed to poll 3% less of the vote than their last effort.. Brilliant!! You couldn't make it up.