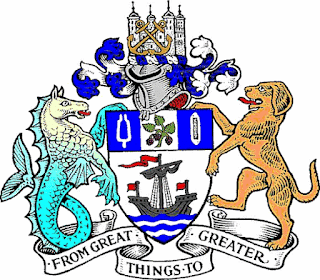 The meeting was held in the Council Chamber in the  Mulberry Place Town Hall E14.

The Hutton report resulted in the requirement to set up a Board for every Council pension fund so this was a historic meeting. The first time there had been a committee of employer and employee representatives meeting on an equal footing to assist in the decisions making process of the  Tower Hamlets  Local Government Pension Scheme (LGPS). Well, that was the aim of the meeting anyway. It didn't quite work out that way on this occasion.

The LGPS has been in existence for around 100 years. The need to set up a retirement scheme for Council workers was one of the drivers for the setting up of one of UNISON's predecessor unions, NALGO and instrumental in this was the manager of next door West Ham Council tram services (a stanch Tory as it happens).

I have been a trade union observer/member nominated/admitted body representative on the Tower Hamlets fund since 1996 and have been arguing since then (and nationally with other UNISON colleagues) for the greater democratisation of our pension funds.

Things do move slowly in the Local Government Pension world although in recent times this is a-changing.

There had to be a meeting held of each Pension Board before the end of July 2015. I went as an observer since I sit on the main Committee. The meetings are open to the public but parts of it may be closed if there is confidential or "restrictive" papers to be discussed.

The acting chair of the Board was a Council chief officer from another London Borough. An interview  process was on going to appoint an independent non-voting Chair. I must admit I do not see the need to have a Chair who is not a full member of the Board. I also think that as a matter of general principle, it is not appropriate for the Chair of any Board to be a serving Council Chief Officer.  A Pension Board is supposed to be holding Officers and Councillors to account. So there will be seen to be an obvious conflict, regardless of the personal merits of such a Chair.

It was decided that despite being inquorate the meeting will go ahead on an informal basis. No decisions could be made but I felt it was still an interesting and useful first meeting. Everyone present was able to contribute.

The report for the meeting to consider was over over 360 pages.Which is frankly far too long and will put off new Board members and even experienced Councillors. It may prove the need for more frequent meeting with shorter agendas and much shorter reports.

After the usual introductions, apologies and declarations, there was an discussion on the role and functions of the Board. There was some polite disagreement about whether the Board was about scrutiny of administration and processes or more than this. This issue about what was the real purpose of the Board kept coming up throughout the meeting.


There was also a constructive debate on terms of reference for the Board, training and its work plan for future meetings.  These issues are really crucial.

The terms of references for many Council Pension Boards were not properly consulted upon with staff or their representatives (or not at all in some instances) and some I have seen are very poor indeed. A number do not even comply with statutory requirements and guidance.

Training is key to the success of the Board but it must be good quality and independent of fund managers, advisers and other conflicted bodies. I am not sure that this option exists at the moment.

The work plan is important but until the Board finds its feet it should be wary of making firm timetables and commitments. Instead it should first deal with bread and butter issues such as its governance and training.

A good point was raised by an employer rep that the Lord Hutton report on the LGPS made it clear that Boards should be concerned with the sustainable future of the scheme and not just bogged down in technical detail.


Next was a presentation by the investment and treasury manager on roles, responsibilities and statutory documents as well as our investment in the London Collective Investment Vehicle (CIV)

There was also a report on fund performance and on the fund 2014/2015 annual report.

There was also a debate on how the Pension board can challenge decisions made by Pension committee. One view was that the Board cannot say the Committee has made the wrong decision, they can only criticise the process. I disagreed and said that in my view the Board could criticise Committee decisions but obviously they would have to justify it. The Board is not a sub-committee of pension committee but has its own statutory responsibilities and ultimately reports to the Secretary of State.

A very important discussion took place on the way different firms of actuaries make different assumptions on pension liabilities. Which means that some LGPS funds may may appear to be doing better or worse than their peers purely to the "House view" of their advisers. Which is not at all a good place for the LGPS to be in.

The Treasury "employer cap" on their contributions was also debated. If Council contributions for future pension service rise above 13% then the Government will force cuts to benefits or increases in contributions for staff. Which of course could result in staff leaving the scheme and bring about its collapse. To stop this we have to cut the massive fees we pay to our fund managers and advisers as well as increase our investment returns.

I also made an argument that the reason that pensions seem more expensive nowadays is that interest rates (gilt yields) are at a 200 year historic low and we need a more modern and realistic means of valuing the true likely costs and not an outdated and broken accountancy yardstick.

The Chair pointed out that his pension fund had assets of £1.5 billion yet were currently only paying out £47 million per year in pensions. So if nothing else changed (which he fully accepted will not happen) his scheme had enough capital to pay this figure for 30 years even if there was no further investment income or contributions.

This was an imperfect but as I said, an historic meeting for the democratisation of the capital of workers.

It seems now that the Tory Chancellor, George Osborne, is determined to force the 89 LGPS funds to pool and consolidate into 6 regional "sovereign wealth infrastructure funds" (whatever that actually means). This could result in the demise of the Tower Hamlets Pension Committee and Board However, I hope and expect that the governance arrangement of the LGPS in the future will mirror the partner approach of Pension Boards rather than that of existing pension committees. We shall wait and see.

I will try and visit other London Council Pension Boards as an observer and report on what takes place. I live an exciting life.

(please note that this is my personal report)
Posted by John Gray at Wednesday, October 07, 2015