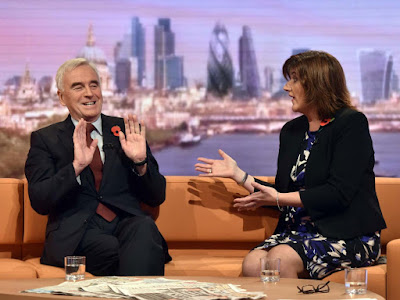 Picture is from this mornings programme on the BBC "Andrew Marr" Show where I saw a confident Shadow Chancellor, John McDonnell, pretty much destroy Tory Education Minister, Nicky Morgan, rather desperate attempts to justify the Government's proposals to rob £1000's from hardworking British "Strivers".

He knew that Nicky was genuinely embarrassed at the prospect of hundreds of thousands of low paid school staff - teaching assistants, admin, cooks and cleaners having a huge cut in their income at a time that the Tories are giving massive tax breaks to millionaires.

This is the letter that John has sent to Gideon:-


"Dear George,
It has only been three months since the Summer Budget when you chose to break the promise that David Cameron made to the British people during the election – that the Tories would not touch tax credits.
We now know that you plan to cut £1,300 from over 3 million families who are in work and doing all they can to pay the bills and get to the end of each month.
Last week you said that you were “comfortable” with this decision, and David Cameron said he was “delighted”, but the British people will not be happy that you are breaking the promise David Cameron gave to them during the election campaign and that working families are having their tax credits cut to pay for tax giveaways to a few wealthy individuals.
Now, you, me and everyone else in Westminster knows that you will have to u-turn on this issue. However, you need to do it in full. It can’t be a fudge. Not some partial reversal that scores cheap headlines, yet leaves people still worse off or lands another burden on middle and low earners or the poorest in our society. You need to drop this policy completely.
I know first-hand that for politicians the fallout from changing policy can be tough. But sometimes you have to be big enough to admit you got it wrong and do the right thing.
So I am appealing to you to put the interests of these 3 million families ahead of any concerns you may have about losing face and ahead of petty party politics. If you do, I promise you personally and publicly that if you u-turn and reverse this decision fairly and in full, I will not attack you for it.
To restore faith in our political system it’s time that politicians stopped making promises at elections that they won’t keep when in power – this is the lesson the Lib Dems learnt the hard way on tuition fees.
For the sake of those 3 million families, and the British people’s trust in politics, please see sense and fully u-turn on your cuts to tax credits.
I look forward to hearing from you.
Yours sincerely,
John"
hat tip Kitty Jones
Posted by John Gray at Sunday, October 25, 2015