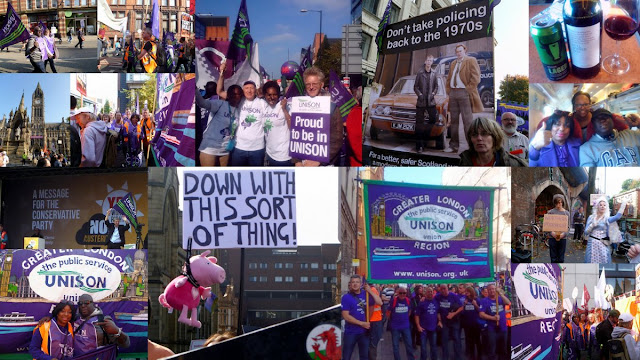 The picture collage above is from the TUC Rally and March which took place last Sunday in Manchester. I went with UNISON Greater London Regional colleagues and helped carry our Banner.

It was estimated that 85000 trade unionists from all over the country took part in the march around the Conservative Party Conference in protest at government austerity policies and their attempts to shackle trade unions.

It was also from my viewpoint an entirely good humoured and peaceful March. There was apparently a tiny minority of idiots who spat at some journalists and threw eggs but they were not part of the main TUC March. Attempts by the Tories and even some Labour figures to link this behaviour with the trade unions and the new Labour leader is pretty disgraceful even by their standards.

By and large in my experience the idiots tend to be middle class posh kids and toy town revolutionaries who don't know the first thing about austerity nor trade unions.

The Tories of course have their own idiotic fringe making references to all protesters as "proles" "swampy" etc as well as allegations about "hating" Britain.

Their extremist agenda will mean that regrettably there will be more aggressive protests in the future.  The Tories use to talk about "Broken Britain", they are now delivering it.
Posted by John Gray at Saturday, October 10, 2015