Denis Healey: the Labour Giant who did the dirty work for socialism 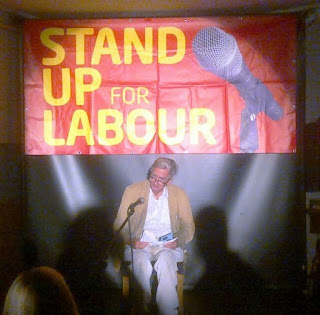 I was at home today recovering still from this weeks Labour Party conference, when I saw on the news that Denis Healey had died this morning in his sleep aged 98.

Which is a good age by any standards, so some of the reporting I have seen that his death is a "grave loss to Labour" is a little misplaced. Instead we should be celebrating his long life of public service to the Party and to our Country.

He was a brave soldier who saw active front line service in North Africa and Italy in the Second War and a brave politician who did what he thought was right regardless (or in spite?) of opposition or abuse.

I heard our current Shadow Chancellor, John McDonnell, say he had "towering intellectual" and although they disagreed politically, he was the "kindest" (that word again) of people privately and completely loyal to the Labour Party in its time of need.

I only ever saw Denis in person once at the "Stand Up for Labour" event at the Labour Party conference in Brighton 2013. He read out his limericks to the audience. He looked a little frail but he went down very well with the audience who sang "Happy Birthday" to him (it was 30 August).

Bearing in mind the current fuss and bother over Jeremy Corbyn's remarks that if he ever became Prime Minister, he would never authorise the use of British Nuclear weapons. The BBC reminded me that Denis, the archetypal multilateralist cold war warrior, had said in an interview that he would have done the same.

The BBC obituary claims that Denis prided himself on doing "the dirty work for socialism". Which if true (and I can't find any other source for this so far) is a fair reflection of the man who stood up to a hostile Labour Party conference and spoke what he thought to be uncomfortable truths. As far as I am aware Denis was very loyal publicly to Labour leader, Michael Foot, while he was his deputy. I have no doubt that he spoke his mind to him. I hope (and frankly have no doubts) that our current deputy leader, Tom Watson, will do the same to Jeremy.

Denis was famous (and wise) for having a "hinterland" away from politics - photography, music, poetry. At a Memorial Poetry Reading in  2005 he read out this marvellous verse about a Royal Navy Fleet Arm pilot which I assume he related to his own war time service.

"Good show !" he said, leaned his head back and laughed.
"They're wizard types !' he said, and held his beer
Steadily, looked at it and gulped it down
Out of its jamjar, took a cigarette
And blew a neat smoke-ring into the air.
"After this morning's prang I've got the twitch;
"I thought I'd had it in that teased-out kite."
His eyes were blue and older than his face,
His single stripe had known a lonely war,
But all his talk and movements showed his age,
His jargon was of aircraft and of beer.
"And what will you do afterwards ?' I said.
Then saw his puzzled face and caught my breath.
There was no afterwards for him but death".