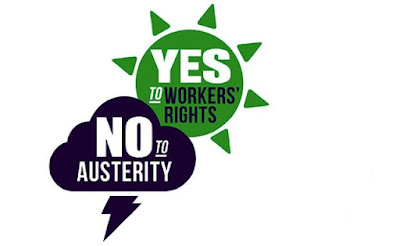 Last week trade union affiliates and activists to West Ham Labour Party were invited to a meeting organised by Kim Silver, who is its trade union liaison officer. ‎ At the meeting was also Peter Smith, who is secretary to the Newham joint trade union committee.

West Ham trade union activists have been in discussions with the NJTUC for some time about forming ‎an anti-austerity campaign group. At the meeting we had a useful and constructive debate about how we can campaign against Austerity and put forward an alternative economic policy.

It was agreed to plan and hold a launch event with if possible some keynote speakers.

At the meeting we also discussed how to support the lobby of Parliament on 2 November against the Tory Anti-trade Union Bill.

Kim is also looking into holding a welcome meeting for the new 461 individual trade union affiliate members in West Ham‎. Hopefully we can get Unison to support this meeting.
Posted by John Gray at Wednesday, October 14, 2015