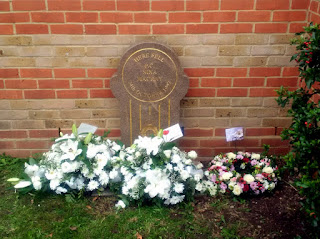 This morning I was present at a memorial tribute to murdered PC Nina Mackay. The 25 year old was stabbed while trying to arrest a wanted man at a flat in Arthingworth Street, West Ham ward on October 24, 1997.

I am not sure whether it is the Council or the Police who organise this event but I will suggest that next year we should invite local West Ham residents and organisations to it.  I think it is important and I am sure my constituents will agree, that we show our respect to those who have died protecting us. I will bring it up with the Council and at our next ward and Stratford forum meeting.
Posted by John Gray at Saturday, October 24, 2015