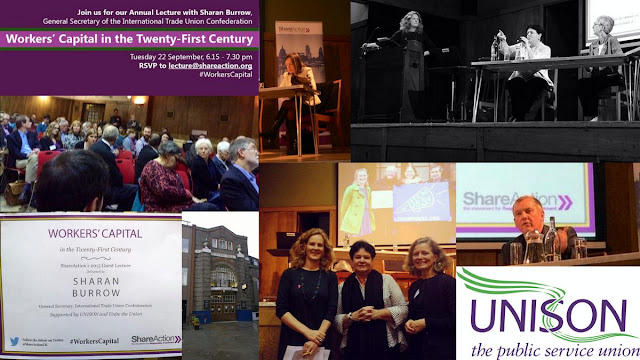 The keynote speaker at this years ShareAction annual lecture in the historic Conway Hall, Red Lion Square, London was the General Secretary of the International Trade Union Confederation, Sharan Burrow.  The ITUC is the global version of the British TUC.

Sharan give a well argued and passionate speech on "Workers Capital" (the pension investments and other savings of workers) and in favour of using it to support climate transition while respecting fossil fuel workers and their contribution to our prosperity.

She repeated her mantra that I first heard her say at the recent CWC meeting last month "there are no jobs in a dead planet".  While she welcomed the green "disinvestment warriors" present who would want pension funds to immediately pull out of investing in Carbon industries such as Coal and Oil, she did favour engagement with firms if they are willing to take part in transition. Some will earn our trust.

If companies refuse to change then we do have the powerful leverage of disinvestment by our pension funds. We are close to losing the Climate Change War and must act if our politicians fail to regulate.

Sharan praised the TUC for setting up "Trade Union Share Owners" where trade union staff pension funds collectively vote their share holding and she hoped other national unions would do the same. Also ShareAction for its success in furthering the Living Wage.  She thought that the election of Jeremy Corbyn as Labour Party leader was a great symbol of the possible.
Her closing remarks was the battle cry "Zero Carbon, Zero Poverty".

Next Speaker was Gail Cartmail from Unite, who spoke about role that unions can play by representing the interests of their members investments, Colin Meech from UNISON who talked about the need to control costs of our pension funds like they do in Holland, while Jeannie Drake reflected that many workers do not have unions in their workplace and have contract not trust based pensions, so how do we leverage their capital?

There was then a Q&A during which Green Party leader, Natalie Bennett, asks whether there are civil Liberty groups present today and can we work together? I tried to ask a question but wasn't called on how trades unions generally will have to raise their game and give practical support and guidance to pension trustees if we want them to pursue a progressive agenda on climate change.


Catherine Howarth from ShareAction closed this successful event with a call for a legally binding "Charter of Rights" for investors and owners.
Posted by John Gray at Thursday, October 15, 2015