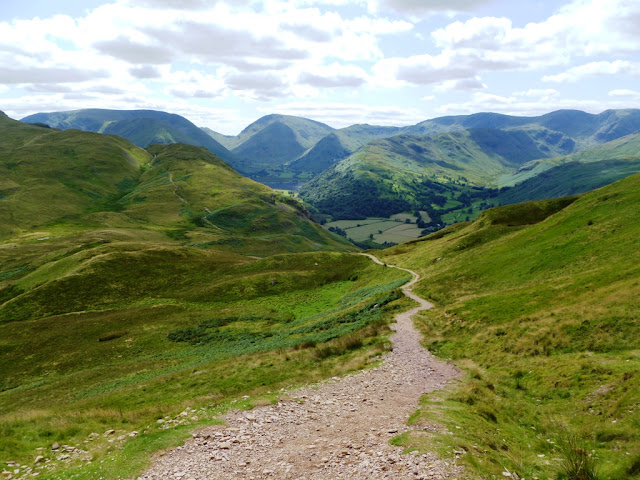 Off message but last week I was on holiday in the Lake District and went for a superb 8.5 mile walk up and down Place Fell then alongside Ullswater. The weather was unusually kind, warm and sunny (unlike some of the other days - there is a reason why there are so many lakes here!).

While I was getting ready to start the walk near the Patterdale hotel car park a local bus dropped off a bearded middle-aged man who was dressed as an Orthodox Jew with a prayer scarf (Tallit) under his black suit jacket, white shirt and black trousers but wearing walking boots and carrying a small rucksack on his back.

He asked the driver some directions then went in the opposite direction to me. The walk started off very flat as you go towards the imposing bulk of Place Fell which is 2154 ft or 657m in modern money. At Side Farm you turn right and start the long slog up hill. It was now very warm but with a refreshing breeze. The higher you go the better the views.

After about 45 minutes at Boredale Hause, which is site of an ancient abandoned chapel, I saw the unusually dressed walker again now wearing a skull cap who was climbing the same mountain. He walked off ahead and climbed steadily. He must have been boiling hot wearing the black suit. I was in shorts and a breathable shirt and was drenched in sweat. I could see him stop to recover his breath ahead but he always kept his coat on.

I eventually caught up with him near the summit and had a chat. I had to ask him was he hot climbing up the mountain dressed in black? He just grinned and replied it was warm work. I asked him was he here for any particular reason? He said it was a long story which he had already shared with many people. Hearing this I had to ask him to tell me, not sure what his story will be. I was not expecting him to say it was all because of "Virgin trains".

He explained that Virgin had an offer earlier this year of a train ticket anywhere for only £11. He had taken up this offer and had booked a day off work today, travelled from London Euston this morning to Penrith and then taken a bus from Penrith to Patterdale in order to climb Place Fell. After climbing the mountain he had to get down in order to catch the bus back to Penrith and the timed train back to Euston.

I asked why Place Fell and he said he had been here many years ago but did not know the area that well but he had read all the guide books about the Lake District and felt he had to visit. He lived in Barnet and worked in Hatton Garden in the City of London but he loved reading about mountains and looking at maps. He then went and pointed out the names of all the mountains and view points we could see from near the summit - Boredale valley, Martindale Fells, the long ridge of High Street with its Roman road, Helvellyn, Gowbarrow Fell and Ullswater. He knew all their heights and history. He admitted his knowledge was purely down to his love of reading guidebooks.

At the summit we took pictures of each other with cameras at the cairn. He stopped briefly for a bite to eat and actually took off his black jacket for a while. He then put it back on and turned back to retrace his tracks and make his way down the mountain, to get his bus back to Penrith and the train back home to London. I thought that I loved walking in mountains but I felt humbled by such dedication and thankful for being lucky enough to spend more than one day here.

I carried on down the other side of Place Fell and walked back to Patterdale alongside the stunningly beautiful lakeside footpath alongside Ullswater.  I wish my fellow London walker had been able to enjoy these views as well.
Posted by John Gray at Monday, August 17, 2015