Evidence from the UNISON Housing Associations Branch to the Select Committee 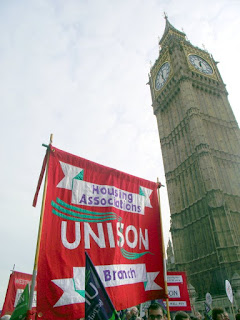 "We are a London-based branch of the national trade union UNISON, which organises workers providing public services.

We welcome the opportunity to submit evidence to the Communities and Local Government Select Committee and have consulted with our members and activists in order to compile this response.

Background
·                     Last year housing associations were assured that they could plan ahead for the future with a new rent increase model of CPI inflation plus 1% increases per year. Instead they have now been instructed to apply a 1% cut in rent every year for the next 4 years. This could mean that some will go bust since they modelled an increase into their business plans when they took loans and bonds to pay for new building. There is an advantage to social tenants in receiving a cut in rents but not if it leads to a net decrease in the social housing stock.

·                      The reductions in rents will also inevitably mean threats to jobs and services. Housing associations have been for many years been providing additional services to residents such as floating support to vulnerable tenants, job training and youth clubs. These will all be at risk.

·                     Housing costs in London are high and decent housing is scarce. The cost of non-socially provided housing in London outside is unsustainable, with private rents averaging £1,500/month, and the average cost of buying a house at around £480,000 (nearly 20 x average wages). Extending the Right to Buy to HA tenants is therefore likely to be extremely popular with London residents; for many this may be their only hope of every buying a property. For some inner London boroughs the number of properties purchased under Right to Buy is over 60%.

·                     Many housing associations currently have charitable status and many of them have benefited from money or gifts of land in the past. This could cause problems with their status if they sell property in this way. This is a real threat to the existence of many associations and means that after years of real-terms pay cuts or stagnation our members may find themselves out of work altogether.

·                      If local authorities have to sell their housing stock in order to fund the discount then that will be not only unfair but financially disastrous for them and their tenants. The 3 year settlement on council housing finances has also been ripped up.

·                     It has been rumoured that instead the government will take away the remaining subsidy for new investment and use it to fund the discount. This will pretty much end the supply of new homes at sub-market rents in expensive areas such as London.

·                     Even if the government does fully refund the cost of Right to Buy (which has not yet been clarified) then since new homes costs more to build than existing properties there will still be an overall reduction in social homes. With high land prices and opportunities for development in inner London low, selling off housing association properties through Right to Buy would mean a net decrease in the numbers of social housing properties across the capital, as properties are sold and not replaced.

Changes to benefits
·                     The proposed maximum benefit cap of £23k per family in London and £20k outside will not only result in more evictions and rent arrears especially for tenants with children. It will also make it harder for landlords to let their empty properties to residents on waiting lists since many will not be able to afford the rent due to the cap. This is crazy.

·                     The so called "pay to stay" will mean that tenants who earn over £40k in London (and £30k outside) will have to pay "market rates". This will be unworkable unless housing associations are given the powers to demand income details from tenants with criminal sanctions, which will of course, go down badly with all tenants. Changes to benefits such as the bedroom tax have already increased the workloads and stress levels of our members, who do a difficult job at the frontline of the government’s austerity regime.

·                     If "pay to stay" does go ahead and means that renters are charged full market rent they will be effectively forced to try and exercise the right to buy in order to stay in their homes. Even if you are on £40k per year salary in London, you will find it difficult to get a mortgage even with a discount – the Islington and Shoreditch Housing Association recently advertised a property in Hackney for sale under a supposedly ‘affordable’ shared ownership scheme for £1,000,000. Market rents will be completely unaffordable in parts of the city. This will increase social cleansing leaving large parts of London available only to the very rich.

·                     Inside Housing recently showed that around 40% of council houses sold under Right to Buy are currently being rented privately. There is no reason why this pattern should not be repeated in the housing association sector, meaning that private landlords will benefit from homes built through public subsidy. Furthermore, many of these properties are occupied by tenants who are claiming housing benefit – a transfer of wealth from the state to private landlords which would be completely unnecessary if these properties were still owned by local authorities.  It is this transfer of housing benefit to private landlords which has led to the Conservative government claiming that the welfare bill is unsustainable and to their cuts to the social security system – a problem that could be solving by relieving the pressure on housing both in London and nationwide.

·                     It is also possible that the certain individuals and rogue companies will be looking to make deals with vulnerable tenants into "loans" to enable them to buy their property in order to get hold of the £100k discount.

Sustainable future
·         The UNISON Housing Associations branch believes that the housing crisis, particularly in London, will not be solved and indeed will be worsened by extending Right to Buy to housing associations. As workers we feel this will remove or dilute the social aspects of our work and lead to increased stress, job losses and the forced closures of many associations. As housing workers and as London residents we do not feel this is the way to solve the housing crisis.

·         We call for a programme of mass house-building in the capital, both for social rent and for private ownership. We also call for greatly increased regulation in the private rented sector to give tenants greater protection and security of tenure, and for rent controls to be reintroduced and rents capped at a “Living Rent” set by an independent commission.