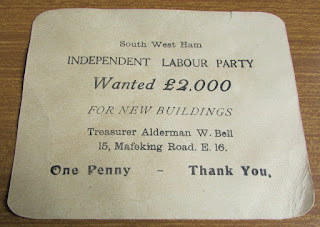 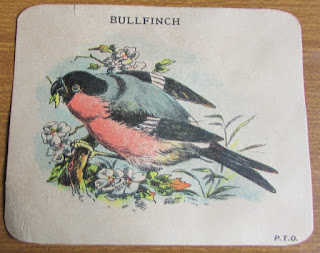 Hat tip Captain Swing who noticed this in an ebay auction. I am not sure who "Treasurer Alderman W. Bell 15 Mafeking Road E16" or what was the "New Building" appeal or why the "Bullfinch"? but suspect he is the former Mayor of West Ham mentioned here http://www.newhamstory.com/node/2219

A key presented to Alderman W.T. Bell Mayor of West Ham, With the West Ham coat of arms. On the reverse:- Opening first block of electricity offices Romford Rd West Ham. 24th October, and an engraving of the building. This is in its own fitted box, by Elkinton & Co. Ltd".

I also think he is listed as an Alderman in 1932 here in the "West Ham Annual Report by the Medical Officer" which is well worth a read if pretty shocking. The death rate for illegitimate infants under age of one was 125 out of every 1000. Nowadays for all infants under one in England and Wales it is 3.8 per 1000. Which is dreadful enough but imagine a death rate nearly 100x worse for the most vulnerable in the life time of my father.

If anyone has any further information on this please let me know.
Posted by John Gray at Monday, August 24, 2015