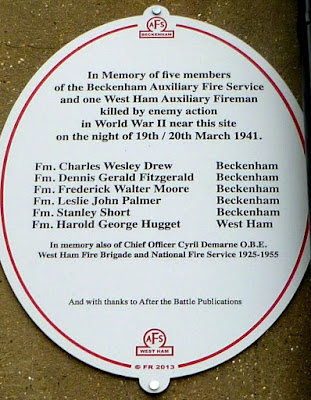 I was astonished to later find out that a memorial in a Church grave yard in West Wickham was to 5 local Beckenham firefighters who had been killed by a German bomb in the Council ward I represent in Newham.

This is the plaque to those heroes who died defending London from the Nazi blitzkrieg. It includes 6th victim Harold Hugget from West Ham.


The plaque is fixed to the side wall of what is now the Plaistow cafe, 163 Plaistow Road, Newham London, E15 3ET.

There is another memorial in West Ham ward to 13 firefighters killed in 1940
Posted by John Gray at Friday, August 07, 2015