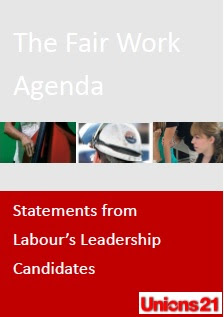 Check out this very useful report by Unions21 on where all  the Labour Leadership candidates stand on Fair work and trade unions.

"The exam question Labour’s leadership candidates were posed for our new publication was set by the Unions21 steering committee: “Outline your views on fair work, particularly focusing on work quality, pay, training and productivity”. A straight forward interview question from leading trade unionists for those vying for the job of Labour leader or deputy.

But the articles submitted in response are revealing on a number of fronts, they seek also to answer some of the more fundamental questions union members might have. How deep is your connection to the trade union movement? What ability do you have to remake the case for trade unions? What future do you see for Labour and the unions?

Not only – What policy prescription do you have? But also, how will you persuade people?
And importantly: Are you an election winner?

The process, we hoped, would be a useful exercise for the candidates in organising and presenting their thoughts on ‘fair work’ directly to a union audience. The result is a rich resource for trade unions and those interested the future of the world of work.

Yvette Cooper begins the collection with a positive vision of a high value, high tech economy. She will ensure 3% of GDP is invested in science and R&D to deliver it—and 2 million more manufacturing jobs. Increased productivity and trade growth need to be national targets. Meanwhile, tribunal fees will be scrapped as will the two year qualifying period for unfair dismissal claims. Her view is that unions and Labour face a common challenge in needing to respond to a fast changing world or be left behind.

Andy Burnham also sees investing in the skills and industries of the future as key. He emphasises the need to boost pay at the low end – and will make any rises in the Minimum Wage apply to working people under 25 years of age. He will create parity between academic and technical education. And Councils will be allowed to build more homes.

Liz Kendal’s article remakes the case for trade unions, drawing on examples of their contribution to campaigns for the National Minimum Wage and their practical success in boosting training. Liz aspires to make it easier for unions to organise and deliver for members. She will bring in online balloting for industrial action, and put employees on the boards of firms.

Jeremy Corbyn describes a crisis in the labour market “not of quantity, but of quality”. He sees unions as “the most effective force for equality in our society”. He will restore national pay bargaining and above inflation pay rises in the public sector. He wants trade unions to have the right to access workplaces to recruit and organise. Jeremy’s prescription of wage councils in low paid industries and an extended remit for the gangmasters licensing authority are broadly in tune with the ideas explored in Unions21’s Fair Work Commission project of 2013.

Caroline Flint’s article begins our collection of articles from Deputy Leadership candidates. Caroline believes union recognition creates better firms – a view she has backed with organising action in her own constituency. She believes “flexibility should not equal insecurity”. Caroline’s range of policy ideas includes a duty on employers to provide employees who make a complaint a list of agencies that could represent them, to include unions.

Stella Creasy uses the lyrics of Billy Bragg’s “To Have And To Have Not” to set the scene for her article. Stella’s focus is on Labour’s regaining of momentum and winning form. “Winning is the only way we can guarantee a government that respects and appreciates trade unions”. Unions are partners to business in building a productive economy, and to Labour in providing the energy, experience and ideas for an effective alternative government.

Ben Bradshaw as Deputy Prime Minister would see the return of the union learning agenda in government. Ben wants to see it grow into a bigger and stronger programme than before 2010. High quality apprenticeships are part of the route to the high skilled jobs of the future. Ben supports workers on boards and wants to see the Equal Pay Act and Equality Act fully implemented. He wants Labour to do more work with unions to develop the next generation of political leaders.

Tom Watson identifies the Government’s “one dimensional political approach to employment” centred on private sector job quantity rather than quality, as a key issue. He believes industrial policy, more ambitious employment standards and collective bargaining are all part of the answer. Speaking as a former trade union official, he paints a picture of a workforce under pressure and his desire to work with unions from “day one” to improve the world of work.

Angela Eagle focuses on pay and training. As Deputy leader she would fight for all workers to be paid a proper living wage, champion stronger sector skills training and strengthen collective bargaining.  Of the Government’s attacks on unions Angela says “A government that was serious about representing workers and ensuring they’re treated fairly would work with trade unions, not try to use the law to weaken them”.

Three conclusions can be reassuringly drawn from this collection: The field of Labour leadership candidates see unions as crucially important to a fair economy, they believe in the role of government in creating the conditions for high quality work and training, and (whether they win or lose the contest) each have a range of credible policy prescriptions to take forward.

Reading across the contributions there is common ground to be found on investment in skills and further education, the prescription of partnership between employees and employers to increase productivity and the need for action on low pay.

Unions21 will continue to work with these politicians, and across all political parties where we find support for a sustainable future for the trade union movement".