Dare To Dream: Shape the Future of London 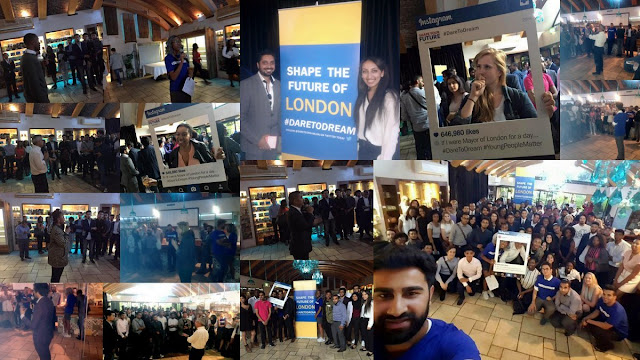 On Tuesday evening I went to the launch of  #Daretodream in South London with fellow Newham Cllr, Rokhsana Fiaz OBE. This was an amazing networking event for young people on how to shape the future of London. The theme was that politics matters to young Londoners and how they can make a difference by engaging and voting in the Mayoral elections 2016.

There was a series of informal speakers followed by London Labour Mayoral Candidate, Sadiq Khan MP.

The event had been organised over social media and over 200 people had registered. The room was  full of confident and articulate young Londoners aged 14-24. A number of whom were invited to tell their story and what they wanted out of politics and politicians for their city.

One young man described himself as lucky since many of his inner city childhood friends were now in prison but that the difference between him and them, was that he was a dreamer but a dreamer with his eyes wide open. Another described himself as the 17 year old son of Iraq refugees. To him politics is not something that other people do  but he believed that politics must adapt to make itself relevant to the young.

Another argued that it was vital for there to be on line voting to engage young people in politics. While the next wanted to dare the Mayor candidates on what they will do if elected to challenge the 2.1 million Londoners who live in poverty?

The last speaker was Sadiq Khan, who spoke about the modern day broken promise that each generation would be better off than the previous. To tackle poverty if he was elected as Mayor, he would make sure that 50% of new homes would be genuinely affordable; that Londoners should have first choice for homes; no more "poor doors", there to be a real living wage and he would cut transport fares. He also wants policing by consent in London and would follow the successful Northern Ireland model of expecting 50% of new Met recruits to be black.

Sadiq finished by saying anyone of you here tonight could be the next great business leader, or could find the cure for cancer or even be the next Mayor of London (but he quickly added - not for the next 8 years).

This was a hugely impressive event, organised predominantly by and for young people, who tend so often nowadays to get a negative press. I don't think that no one who attended this event could be anything but positive about the current generation of young Londoners and the future of our capital in their hands.

Update: Sadiq has written about the event here  http://www.huffingtonpost.co.uk/sadiq-khan/sadiq-khan-london_b_7946508.html
Posted by John Gray at Thursday, August 06, 2015