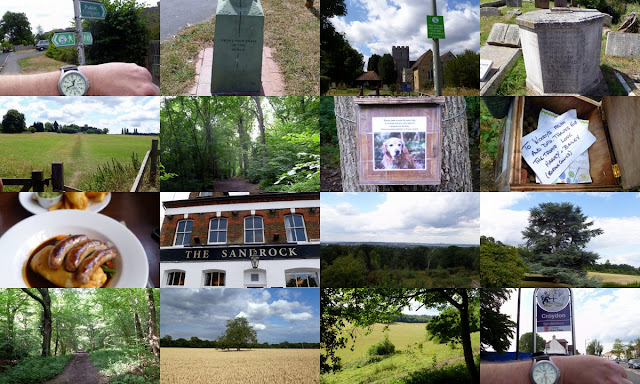 Last Saturday I resumed my plan to walk around London along the loop walks after a gap since May. Saturday was better than Sunday since railway and bus links, there and back, are much better. I used the Transport for London (tfl) guide since I couldn't find my "The London Loop" book. Not recommended but better than nothing.

The TFL guide said it was 10 miles long. The weather was warm and mostly sunny.

First thing I noticed on the walk was a memorial in the grave yard of St John the Baptist Parish Church, in West Wickham, to 5 Beckenham firefighters killed by enemy action on 19 March 1941 (see top right). To my later astonishment there was a West Ham connection, where I am a Ward Councillor, with this memorial. The 5 local firefighters were helping London during the Blitz and were killed by a German landmine on route to a fire in Silvertown outside 163 Plastoiw Road, E15 alongside a local London firefighter. I will try and find out more about this.

The London Loop guide book (which I have now found) dates the footpath from the Church to the road below from Saxon times.  Imagine all the people who have walked along it down the ages.

In a wood on the hills opposite there was a marvellous memorial to a dog called "Woody" by his owners, who had fixed a box full of dog biscuits to a tree for other walkers to "treat" their dogs.

We stopped off for lunch at "The Sandrock" pub. Recommended - a great two course lunch deal for only £9.95.

There was some great views overlooking Croydon and central London from the viewing platform on Addington Hills.  Heathfield House, which is a staff training centre owned by Croydon Council had beautiful gardens and also a magnificant vista.

This was the first London Loop walk so far that was mostly rural countryside, some of which was as quiet and beautiful as you can get in any part of South East England. This was indeed a lovely walk.

Route back home to East London was a bit of a mess. I would suggest that you take bus 403 direct to East Croydon rather than via train station in Sanderstead and avoid slow trains into London Bridge or Victoria.

Check out more photos of this walk on my "London Loop" Facebook page. https://www.facebook.com/LondonLoop2015?fref=ts

Update: picture of plaque in West Ham ward, Newham, London to the heroes killed defending London during the Blitz.
Posted by John Gray at Saturday, August 01, 2015