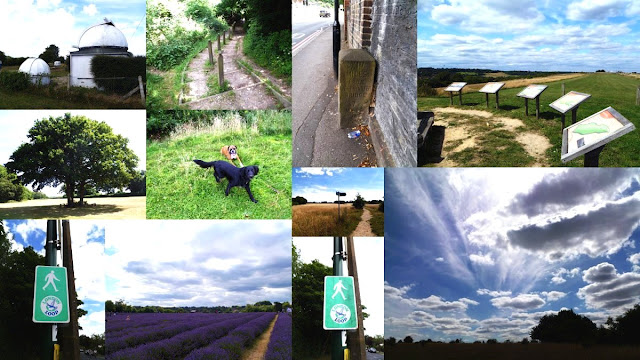 Off message but another marvellous 10 mile loop walk from last Saturday.  Hamsey Green is not easy to get to from East London. Train it to East Croydon then 10 minute walk to 403 bus to Hamsey Green. Used "The London Loop" guide book.

Weather was warm and sunny. This was a walk along ancient commons and heaths. We stopped for a picnic on on a bench under a large oak next to Kenley airdrome. Nearby was a modern day kiln used for converting wood into charcoal.

Kenley airdrome is now an Air Training Corps glider school but was a former RAF Battle of Britain airbase defending London. It looked very peaceful now but on 18 August 1940 the Germans attacked the base and destroyed 10 hangers and 12 British aircraft. A dark day for the RAF.

The next significant part of the walk was up and down the well named country park "Happy Valley" then along the simply glorious and historic Farthing Downs ridge. Who would think Croydon has such beautiful walking treasures. If it was not for the London Loop I probably would never have walked here.

Feeling I had to give something back, I decided to clean with "wet wipes" some of the rather grubby "London Loop" signs that I could reach (see picture collage before and after). Also in the collage is the Coulsdon milestone was the site of the first ever public railway, the Croydon, Merstham and Godstone Railway, which opened in 1805.

Soon after was the Woodcote small holdings which were built to provide homes and jobs "fit for heroes" for soldiers returning from world war one. The final feature of the walk was the lavender fields  near Oaks Park which was full of families with young children running along the rows of blue lavender.

We took the train back to London from Benstead but please note that the station is closed on Sundays.  I think this has been the best loop walk so far.
Posted by John Gray at Sunday, August 09, 2015