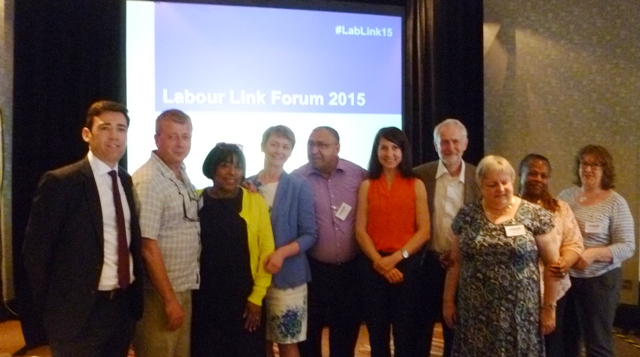 The UNISON political fund representing members who have decided to affiliate to the Labour Party began its Annual Forum this morning in Manchester.

The forum was opened by Dave Prentis who promised delegates that as long as he is General Secretary, unison will never walk away from the Labour Party. The unions formed the Labour Party and we need the Party to make a fairer society.

Following the defeat in May and the Party leadership elections it was decided to cancel the usual workshops and hold hustings of leadership candidates at Forum.

The four candidates for leadership were given 4 minutes to speak, then there was a Q&A and finally they were given 2 minutes each to make a closing speech.

Andy Burnham was first and he stood on his past record, opposition to Tory welfare cuts and new anti trade unions laws.  Labour will be more diverse and look, sound and be different if he is the Labour leader.

Next was Liz Kendall who thanked Unison for all the help we gave during the general election and especially for the ethical charter for social care. She made it clear that the Party must elect the best candidate to become a Prime minster.

Former NUPE union official Jeremy Corbyn wanted the Labour Party to be and act differently and challenge the government over austerity.  You cannot cut your way to prosperity.

At noon the hustings stopped for a minutes silence in memory of the victims of the massacre in Tunisia, at least 3 of whom are Unison members.

Final speaker was Yvette Copper who started by stating that "opposition sucks" and described herself as the granddaughter of a miner, daughter of a trade union official and a working Mum.

Following lunch the deputy leadership hustings began. The format was the same as before.

Stella Creasy was first and she told us how proud she had been to work with Unison in successfully challenging loan sharks and support of a living wage.  She wants the Labour Party to be a movement and not a machine.

Former union official, Angela Eagle, argued she loves the Labour Party and that the Party and the trade unions are two sides of the same coin.  If elected she will be a members' deputy and will put you first.

Dave Anderson MP stood in and gave a speech on behalf of Tom Watson, who was attending a memorial service for victims of Tunisia in his consistency. It was Labours fault they lost the election since they lost trust with voters. He would restore it.

Ben Bradshaw wanted to mend not break the link with unions and the Party. He is not from the right nor the left of the Party but he is loyal and would tell the leader privately if they were wrong and not in a right wing tabloid.

Final candidate was Caroline Flint who gave a very personal account of why she joined the Party as the daughter of 17 year old single parent. The Party is not a pressure group but exists to change society by winning elections.

The National Labour Link Committee will meet on July 29th and make a decision about nominations.

After the hustings the forum started debating motions and passed significant policy on the response to the General Election; the crisis in Scotland; devolved power in England; Labour leadership ballot and the Labour Link & Fighting Austerity.

(Update: for a more detailed and thoughtful account of the Leadership husting see http://unisondave.blogspot.co.uk/2015/07/uk-labour-leadership.html)
Posted by John Gray at Friday, July 03, 2015