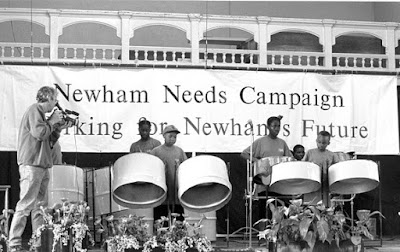 This is on top of £106 million cut in government funding during the last five years. The government not only want to reduce public expenditure but also move away from a needs based support for local authorities to one based on simple population.

This means that Councils like Newham that has amongst the worse poverty and deprivation in the Country will be harder hit than other more richer councils. Newham thinks that next year we will receive "£284 less for every home in the borough while Richmond Council, a much wealthier part of London, is only losing £57 per home".

Things will be very tough. The Council has started a formal consultation process on "Newham Budget Challenge" where residents and local businesses can sign up here to receive information and take part in surveys.

What I would like to do as a ward councillor is to consult directly with my constituents about what is important to them and what we (Council and residents) should collectively do about opposing the cuts.

I think that it is not enough for Councils to just "manage" the cuts by cutting services and raising income to try to protect essential services as best we can. Important as this is. We must also see if we can oppose and campaign against cuts.

Privatisation of Council services is no answer. It only results in local management awarding themselves huge pay rises and profit being extracted from public services. The low paid and the vulnerable always suffer.

While I fully accept that there is a majority Conservative government in power, I do not
believe that we have to just "go along" with the cuts and not actively oppose them. Under past Tory governments we were able to stop some of the things that they wanted to do. Plans to introduce the Right to Buy for Housing Associations were overturned in the House of Lords after a successful campaign. Remember how the poll tax was defeated by a combination of popular protest and rational argument. The privatisation of the Forestry Commission in the last government was also stopped by a well run and organised campaign.

The cuts in benefits for families is causing genuine unease amongst "one nation" Tories and those concerned with Children's welfare and housing.  Intelligent Tories know that our country faces civil unrest and disaster if inequality just keeps on rising.

The Council supported "Newham Needs" Campaign in the 1980s and 1990s was successful in highlighting the shortfall in government funding. We have to work again with the trade unions and resident groups. The trade unions have 6.5 million members and are the largest civil society organisation in the country. They are national (and local) mass organisations that have the scale and resources to help us win.

We also need to show our residents clearly who is to blame for the cuts. These are Tory cuts not Labour Council cuts. They need to know that they are suffering from being expected to fund tax cuts to millionaires and their mansions.

The Tories only have a small majority and run the obvious risk of a major split over Europe. Cameron said he is will only be Prime Minister for 5 more years and there will be infighting about who will succeed him.  Sensible Tories know that they only won in 2015 since voters don't like one term governments and were prepared to give them the benefit of the doubt.  Which they won't do in 2020.

We need to play to our strengths and not our weaknesses.  We will probably not be able to get rid of this rotten government until 2020 but they are in the meanwhile vulnerable to targeted campaigning. While it is silly and pointless to think that Newham residents will go on never ending demos to "smash the state". We can and will win victories if we seek real unity, achievable aims and fight back intelligently.

Tomorrow Newham Councillors have been invited to meet with local trade unions to discuss the cuts and what we can do with residents and other stakeholders to oppose them. We must start the fight back together and not surrender.