100th anniversary of my Grandfather arriving at Gallipoli 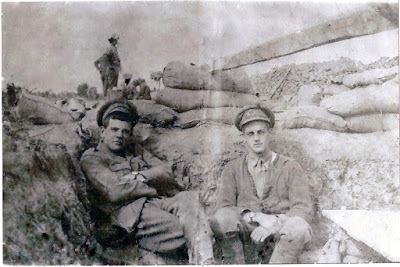 According to this history of the "Hawke Battalion" Royal Naval Divison (RDN) by Douglas Jerrold, my Grandfather ( Taid in Welsh) Sub-lieutenant, Frederick Matthews, first joined them on active service a 100 years ago yesterday on 18 July 1915.

The Battalion was "dug in" occupying trenches at the Gallipoli beach head only a short distance from Turkish Army positions.

It was the height of summer and apart from insanitary conditions and disease there was constant shelling, sniping, attacks and counter attacks. The Battalion stayed until the allied retreat in January 1916.

My "Taid" was an apprentice in a South Wales Steel works before he joined the RND. He served in the Battalion throughout the war and also fought in France and Belgium. He later became a Captain and was awarded the Military Cross in 1917.

I will try and post in chronological order upon the major events that he and the Battalion experienced in the course of the War. While Gallipoli must have been a terrible experience, some of the battles that the Hawke Battalion took part in later on were far worse and completely horrifying.

The family picture above is of my Taid (sitting on the left with arms folded)  in the trenches with an unknown comrade which the family believe is probably Gallipoli in 1915.
Posted by John Gray at Sunday, July 19, 2015