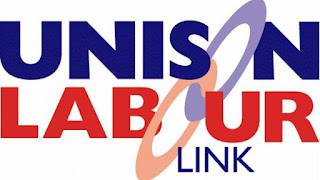 This survey below has gone out to all UNISON members in Greater London region who pay a voluntary affiliation levy to the Labour Party.  We did a similar survey for the London Mayoral candidate and got an excellent response.

I hope to be able to attend the UNISON National Labour Link leadership nomination meeting as a re-elected NEC Member (NEC will elect the same day - fingers crossed). It will be good to get the views of London on who we should nominate. I will also consult with my branch and Community Service Group colleagues.

Following the recent General Election and the resignation of Ed Miliband the process is now underway to elect a new Leader and Deputy Leader of the Labour Party.  UNISON is eligible to make a nomination and is seeking your views so these can be considered by the National Labour Link Committee when they meet next week.  All members are encouraged to participate and have their say.

We would be grateful if you could take a few minutes to answer a very quick survey (there are only 3 questions and it should take just a moment). Just click here to start: (Survey Monkey link on email only).    The survey will close on 12 noon on Tuesday 28 July.

The four candidates standing for Labour Leader are Andy Burham, Yvette Cooper, Jeremy Corby and Liz Kendall.  In accordance with the agreed process UNISON London Region encourages you to support candidates who have shown a commitment to UNISON values by joining our union.  These are:

The five candidates standing for Deputy Labour Leader are Ben Bradshaw, Stella Creasy, Angela Eagle, Caroline Flint and Tom Watson.  In accordance with the agreed process UNISON London Region encourages you to support candidates who have shown a commitment to UNISON values by joining our union.  This is:

To view opening and closing statements from the candidates at a hustings event at UNISON's National Labour Link Forum please go to
http://www.unison.org.uk/news/labour-contenders-make-their-pitch-to-unison-members

The responses of the survey will be forwarded to the National Labour Link Committee who will make the nomination.
Posted by John Gray at Thursday, July 23, 2015